#2 Combat Diver (12-1): Price player kicked off his campaign in a minor stakes at Laurel and closed nicely to just miss going a one-turn mile, in an effort that should set him up nicely for a return to two turns today. Contessa charge is sure bred for the trip, so even though he bombed in his lone two-turn run in Aqueduct’s GII Remsen in November, don’t forget that the track was a paved highway that day and no one passed a horse. Son of Line of David, who won the Arkansas Derby a few years back, drew perfectly, goes second off the layoff and meets a crew absolutely loaded with speed, so you could do a lot worse than landing on a lightly raced colt who will be passing horses late; expecting a big run.

#1 Dontbetwithbruno (5-1): The first part of a three-pronged Pletcher-Repole entry exits two all-out local runs, the last of which earned him a maiden win at today’s distance, so there’s little doubt that he’s stepping up here. Of course, we all know what this barn can do with lightly raced 3-year-olds, plus this isn’t your dad’s Gotham, either, so there’s no reason that he can’t make a dent from what figures to be a midpack stalking trip. Price is the issue for this son of hot sire Tiz Wonderful, as there’s just no way you get fair value on anything from this barn, much less when you get a 3-for-1, so while he’s appealing on paper, he’s not at all on the toteboard; eligible to run in the number.

#3 Classy Class (7-2): Logical contender lost both the battle and the war to today’s favorite El Kabeir last time in the local GIII Withers, when he dueled inside then was passed late by that gray plus race winner Far From Over, who had a nightmare trip, so running third isn’t as good as it looks on paper. On the plus side, that potential monster isn’t here today and El Kabeir seemingly was exposed last time, so second off the layoff, this Discreetly Mine colt can certainly move forward with McLaughlin calling the shots. But from a race flow perspective, he really takes all the worst of it, as he looks destined to be the inside speed again, with a bevy of runners pressing him from the outside, not to mention that he’s tired in both two-turn attempts, so at an underlaid price with a negative race flow, let’s keep looking; playing against. 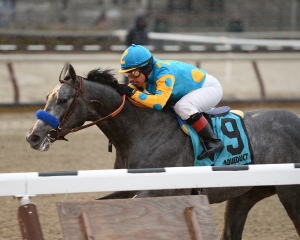 #4 El Kabeir (8-5): Extremely sketchy favorite tripped out nicely in the Withers, when he was outside pressing ‘Class while seemingly having his measure at any time, but he was no match at all when Far From Over came calling and checked in second, which left a really bad taste in the mouth going forward. Fans will say this son of Scat Daddy bounced off a very visually impressive local win in the GIII Jerome two-back for Terranova, and that may well be the case, but skeptics will say that he’s basically the same horse he was last year and hasn’t improved an inch. And yeah, this field doesn’t seem much on paper and he should trip out again, but the same was said in the Withers and we all saw what happened, so at about 5-2 there is a whole lot of risk and not a heck of a lot of reward; thinking we’ve seen his best.

#5 Lieutenant Colonel (5-1): Scary invader looked sharp winning his debut going a one-turn mile at Gulfstream Park for Brown and will surely get bet today as he invades for one of the most potent and popular barns on the backstretch. Well-bred son of Colonel John tests two turns today, but dad excelled at it, so you would think that this is well within his wheelhouse, but don’t think it will be a breeze either, as a class rise and an initial two-turn attempt is hardly a small deal for a horse with just one lifetime start. Respect this barn and anything it sends out, but he wired over a Gulfstream track that always caters to speed, so shipping 1,200 miles up I-95 and meeting a crew that has a ton of speed seems like a lot to ask; making him prove it.

#6 Tiz Shea D (15-1): Very intriguing private purchase ran off going 5 1/2 furlongs in his debut at Parx for Jason Servis and now goes to Mott off that run, so to see that patient Hall of Famer toss this guy into the deep end of the pool is very noteworthy. And while he wasn’t beating anything in Philadelphia, he is a son of Tiznow out of an A.P. Indy mare, so sprinting isn’t exactly what he’s cut out to do, which makes that dominant win even more impressive. On paper he’s looking up at a lot of these, but we’ve already mentioned the favorites are tough to trust, the newcomers are a mixed bag, and the pace looks hot and contested, so with all that in mind, let’s see if this newcomer can makes some waves; mows them all down in the lane.

#7 Toasting Master (20-1): West Point runner hasn’t fired in his last two but does get a pass for the run at Ocala, which came over a synthetic track, so at least he should appreciate a return to the real stuff today. Romans had this son of Congrats going great guns to close out his 2-year-old campaign last fall at Churchill Downs, but his seasonal debut at Gulfstream in January was a dud and now he needs to rebound from another modest run at Ocala, in what was his two-turn debut. He’s also another who wants to fire early and mix it up, which certainly doesn’t look like a recipe for success today, so as much as you have to root for his connections, this just seems like way too much; not seeing it.

#1a Uninfluenced (5-1): The second of the Pletcher entry sure picks a tough spot to get his first win as he enters off a pair of money-burning runs to start his career and looks overmatched today. Indian Charlie colt did try two turns last time and he just missed in the mud, so at least you know the trip won’t be a worry, but the positives are few and far between. If nothing else, he should trip out nicely off the speed, but as is the case with his buddy ‘Bruno, you’re going to have to take about 4-1 on a horse that should be about five times that price; no thanks.

#8 Tencendur (8-1): Sharp New York-bred quietly ran very well when fourth in the Withers for Weaver and, if nothing else, showed that he doesn’t need fellow Empire-breds to make a dent. Blinks go on this Warrior’s Reward homebred today and that seems a bit odd, because now he’s potentially another passenger on an engine car that is looking mighty crowded early. This wide draw didn’t do him any favors, either, as he may be forced to go or run the risk of losing ground into the first turn, which would complicate his chances that much more. Price players could do worse than landing on a runner who exits a career-best run, but bettering that finish this time might be a tall order; underneath, if at all.

#1x Blame Jim (5-1): The last of the Pletcher trio has the most upside but brings the most questions, too, as he’s run just once since September and has never run past six furlongs in his two career starts. Sharp Humor gelding was game pressing the pace then relenting to stablemate Stanford (check him out Friday at Gulfstream) in an optional claimer at Gulfstream in February and should improve off that run, but he’s going to have to in order to threaten here, as this draw is brutal and he could be headstrong, too, as he’ll face a clubhouse turn for the first time and may want to run off. And while he did run fast last time, his stablemate wasn’t all that visually impressive and himself was running for the first time since August, so you’re allowed to poke a few holes through that run. And again, while we know about the barn and are aware of the upside here, it’s the price that just doesn’t make him attractive; tabbing for down the road.