by Brian Nadeau of Horseplayer Now and Capital OTB TV.

#1 Cherry Wine (20-1): Deep closer used the race flow to muck up for third in the GI Blue Grass at Keeneland and will need an epic pace meltdown to have any kind of chance in the second leg of the Triple Crown. Son of Paddy O’Prado was left out of the Kentucky Derby as he was short on points, so Romans opted to sit back and wait for Baltimore, and, if nothing else, it does look like this colt will get an honest pace to rally into. The Blue Grass runners didn’t do much running in Louisville, even though the pace was to their liking, and this colt always gave the impression he was second-tier to begin with, not to mention that those who skipped the Derby in the past and came back to run here often didn’t fare too well, so with that in mind, it’s tough to think he can make too much of a dent; eligible to pass a few and sneak into the super. 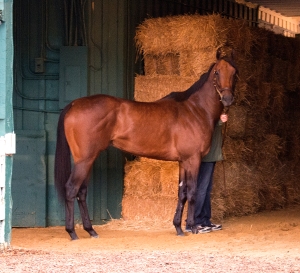 #2 Uncle Lino (20-1): The potential inside speed got all the worst of it with this draw, as he’s likely going to have to go early to secure position or run the risk of getting pushed back and being much further off the pace than he’s accustomed to being, which makes for a dicey run into the first turn. Son of Uncle Mo was a game winner of the California Chrome last month at Los Alamitos Race Course but was a well-beaten fourth in Santa Anita’s GII San Felipe in March and third in the GI Santa Anita Derby, beaten some 8 1/2 lengths by fellow rival Exaggerator, who won’t even be favored here, so that tells you where he stands in the pecking order. Sherlock has done a nice job getting the most out of a horse that is more workmanlike than brilliant, and there’s probably a graded stakes win in this colt’s future, but it’s hard to envision any scenario where that day is today; tough to tout. 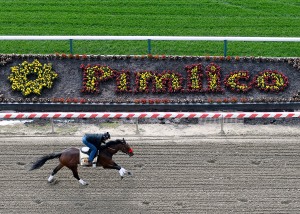 #3 Nyquist (3-5): Derby hero was simply stunning in victory, as he chased an extremely hot pace, put third-place finisher Gun Runner away off the far turn like he was tied to a pole, and then had plenty left to hold off Exaggerator’s late run to move his lifetime record to a perfect 8-for-8. Son of Uncle Mo answered any lingering questions about distance that day, too and, considering he’s now beaten his main rival four times and actually shortens up a sixteenth of a mile today, you kind of get the impression it’s “name the score” time. O’Neill has done a masterful job in handling this colt, who has shown time and again he can be placed anywhere in a race and doesn’t have to take his track with him to fire, either, and that’s before we even mention that, with just three starts this year, he’s a fast, fresh horse who simply lays over this field and gives the impression you’re going to see something very special under Old Hilltop; immortality awaits.

#4 Awesome Speed (30-1): Well-bred son of Awesome Again gained an automatic entry into this race when he was second but put up to first in a rough stretch run of the local prep, the Federico Tesio in April, but will need to run several lengths faster to get even the smallest piece of this. Goldberg does a tremendous job with a small stable year in and year out, and he doesn’t win 26% by running them where they don’t belong, so if nothing else, you’ll get a big price on a stalker who could trip out nicely. The one time this colt tried graded stakes foes he was fourth, some 13 lengths behind Mohaymen in Gulfstream Park’s GII Fountain of Youth in February, so unless he’s grown up a lot since then, he’s way out of his element here; midpack finish appears his ceiling. 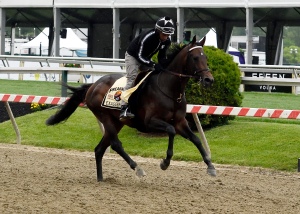 #5 Exaggerator (3-1): The main danger to the Derby winner flew home from 15th to get second, beaten 1 1/4 lengths by Nyquist, after weaving his way in and out of traffic from some 17 lengths back in Louisville, and it’s obvious that the quicker they go up front, the more chance he has in the lane–though don’t overlook the fact that Nyquist was on that suicidal pace and did all the dirty work and then some, yet still had plenty left in the tank to hold this guy off, while moving his record to that aforementioned gaudy 4-0 mark over him as well, which means that there’s a lot of work to be done if the Desormeaux boys are going to turn the tables today. If you’re a fan, you likely have Jim Cantore on speed dial in the hopes that he tells you the expected heavy rains are hitting, as this son of Curlin aired in the Santa Anita Derby in the slop, but even if that’s the case, simple logic tells you he’s just not in the same class as a horse who looks poised to join the most elite club in all of sports in three weeks’ time; second-best, again.

#6 Lani (30-1): Give this Japan-based son of Tapit credit, as he was ninth in the Derby after many experts (including this handicapper) gave him little to no hope at all to run inside the top 12 or so, so to be beaten just 10 3/4 lengths wasn’t a bad run at all. Of course, it’s not like he did any running in Louisville, either, as he lagged back in 17th early and passed some drunk soldiers in the lane, though he should be more accustomed to American racing now and could move forward off that run. Give Matsunaga credit for forging on, and it’s great to see Take want to ride again, too, so if you’re looking outside the box and trying to spice up the exotics, it’s not completely impossible that this is the colt to look to; moderate appeal underneath.

#7 Collected (10-1): A year after saddling American Pharoah to a romp in the Preakness, Baffert is back with a much less-heralded runner who didn’t make the Derby but does come in off two straight wins in the resurrected Sunland Derby in March and the GIII Lexington at Keeneland in April. That win last time was darn good, too, as he looked about 1-5 the entire way and powered off by 4 lengths, in what was a breakthrough win, which is a good thing, because up to this point, nothing he’s done against the big boys (he was a modest fourth to Derby fifth-place finisher Suddenbreakingnews in Oaklawn Park’s GIII Southwest in February) is remotely good enough to make a dent here. City Zip colt isn’t really bred for this, and with a legendary trainer calling the shots you won’t get any value, either, and with a running style that should have him on or just off what is expected to be an honest pace, let’s make him prove he’s up to the task before backing; confidently playing against.

#8 Laoban (30-1): Speedy maiden was excluded from the Derby on points but actually was a very sneaky-good fourth in the Blue Grass, as he ran all the other speed off their feet and held relatively well in a race where deep, deep closers ran 1-2-3. Though, while that’s a nice feather in his cap, he was still three lengths behind Cherry Wine, who is a rank outsider here, and, oh yeah, he’s still a maiden (!), so to think he can play with these is a big leap of faith. Respect Guillot for wanting to be part of the party, and this son of Uncle Mo could make some waves later in the year, but at this point, even with the blinkers coming off today, this has pop-and-stop written all over it; thinking he beats Nyquist to the winner’s circle by about four hours in the MSW on Belmont Stakes Day.

#9 Abiding Star (30-1): The fourth son of Uncle Mo is a rapidly improving individual who enters off five straight wins that have seen him go from a maiden-claimer at Laurel in January to the Parx Derby last time just 14 days ago, and all five were done in wire-to-wire fashion. Veteran horseman Allard decides to take a big shot here with a colt that will undoubtedly add fuel to the fire, especially since he drew wide and will have to be used to gain position into the first turn. Florida-bred obviously has never been better and has that working class hero mantra to him, but this is a mighty tough spot to venture into graded waters for the first time; not seeing it.

#10 Fellowship (30-1): Stretch-runner is another who wanted to run in the Derby but got excluded on points, but instead of passing, new trainer Casse opted to run in him a very odd spot, the one-turn GIII Pat Day Mile on the undercard, and it was no real surprise that he was a non-threatening fourth in a race that was just too short for his come-from-behind style. Well, he gets to do what he wants here, which is run two turns, and if you saw him at Gulfstream, when he was third in the Fountain of Youth and third to Nyquist in the GI Florida Derby in April for then-trainer Gold, you know he’s got a run in him that can get a piece of a big one. Well-traveled son of Awesome of Course isn’t a win threat, but if they go as fast as they are expected to go early, there’s a chance he can pick up some scraps in the lane; would be no surprise to see him run in the number underneath.

#11 Stradivari (8-1): The most talented of the new shooters wowed everyone with his 14 1/2-length romp in very fast time in a Keeneland allowance in April and now gets the acid test for Pletcher, who rarely runs anyone in the second jewel of the Triple Crown, so you know he clearly likes what he has here. Lightly raced son of Medaglia d’Oro has run only three times and never in a stakes, so the hurdles are hardly insignificant, regardless of how much talent there is here, so he’s got to prove he can step up and face a fight, which is something he didn’t have to do in the least last time. Stalker drew well for his style, as he’ll have the length of the stretch the first time by to gauge what is happening to his inside, and from there it’s simply a matter of if he’s good enough or not, and since we’ve already mentioned how tough it is for a newcomer to beat the Derby horses, it means a win is too far out of reach at this juncture; can’t see him cracking the exacta.