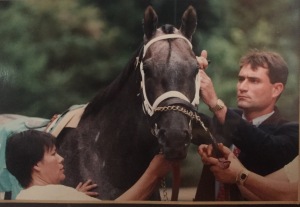 Trainer Rick Schosberg shipped from his Belmont Park base to Saratoga this year on the Tuesday before the meet started. The routine has been the same for decades: the stable staff heads up to get the barn ready, and then the horses arrive, with Schosberg, his wife Dawn, his dogs following behind. The same process, every year.

Except not this year, not exactly. Ordinarily, his long-time assistant Amparo Zermeno is among the first to arrive, ensuring that the barn is ready to receive the horses. But not this year.

“It was completely different,” said Schosberg. “A cog in the wheel was missing, if not the wheel itself.”

Zermeno died unexpectedly in April, after a short illness diagnosed within weeks of her retiring in March after 40 years on the racetrack. It was not the spring that Schosberg’s barn or Zermeno’s family expected.

Continue reading at the Saratoga Special…