#1 State of Honor (8-1): The first of two for Casse ran quite well when he was second, beaten a neck, in his dirt debut in Gulfstream Park’s one-turn Mucho Macho Man off the layoff last time and will benefit from this ground-saving draw, too. Son of To Honor and Serve adds blinkers to what was already a very tactical package, so he should be close early, and the price will be right, too, but as we saw with champion Classic Empire last week, you have to take this barn’s strong 2-year-olds with a grain of salt in these 3-year-old dirt races; making him prove it.

#2 Kind and His Court (8-1): Casse’s other runner is like his stablemate, but one race before him in his cycle, as he’ll make his 3yo debut today and his first dirt start as well, after a Tapeta and turf campaign at Woodbine. But, unlike his ‘mate, he’s by Court Vision, who did his best running on turf, so it’s tough to think he can make a dent on a group like this, especially with several hurdles to jump over; not seeing it.

#3 Fact Finding (9-2): Undefeated son of The Factor leads an uncoupled and extremely talented duo for Pletcher, and he drew well for his two-turn debut today. Versatile runner doesn’t have to be on the lead, but this inside draw and the fact he’s been coming out of some sharp one-turn races says he’s going to be involved early, though while dad did get two turns, he was much more brilliant as a sprinter, so you wonder if that’s where this colt’s calling will be. On the face of it, he’s a big player here, and if he shakes loose they might not catch him, but he’s really no faster than anyone else on paper and there are some heavy hitters to his outside; underneath, if at all.

#4 Chance of Luck (15-1): Longshot just missed in the local prep, the Pasco, and now adds blinkers while stretching out to two turns for the first time, too, so he figures to be amped up early, especially after showing a lot of speed in his first three starts. If you’re not familiar with Bennett, he’s one of the best on the grounds, so you might want to give this son of Skipshot a second look, but if he couldn’t win last time at 7-5, it’s tough to think he can today at about 25-1; easy toss.

#5 Six Gun Salute (30-1): The longshot on the board was a well-beaten fifth in the Pasco and now adds blinkers in an effort to get a bit more tactical speed after falling too far back early. Harty knows what to do with a good horse and this colt is by Colonel John, who he trained to some big wins, but it’s tough to think this offspring will add to the list; hard to endorse.

#6 Wild Shot (5-1): The first of four straight heavy hitters was a good second to today’s favorite McCraken when last seen in Churchill Downs’ GII Kentucky Jockey Club in November and has an exciting blend of tactical speed and stamina for Arnold, who has this colt feeling good after three straight bullets at Payson Park. Son of Trappe Shot is also likely to get the jump on the big trio to his outside, which bodes well for his chances, so if he can make first run off the far turn and open up, there’s a good chance he can turn the tables on the favorite; looms mighty large.

#7 Tapwrit (8-1): Tricky read will take a lot of money for Pletcher and sure looked good winning by a pole in the Pulpit at Gulfstream last time, though it’s very important to note that was an off-the-turf affair contested over a very sloppy track. Still, he did it with aplomb that day and the win two back—on dry land—going two turns at Gulfstream Park West was sharp, too, and getting José Ortiz to ride is never a bad thing, either. Tapit colt meets much better than he’s ever faced today and will need to run faster than ever to win, too, and while he still has a lot of upside off just three starts, it’s probably best to make him prove it before backing him against a seasoned group like the one that surrounds him; minor award may be his ceiling. 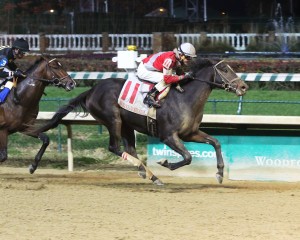 #8 McCraken (2-1): The obvious horse to beat has been high on many Derby lists, especially since he’s won all three of his starts at Churchill and done it with a sharp, sustained off-the-pace rally that Derby pundits are known to fall in love with. Well, that really doesn’t matter today, as he’s far away from home over a track that can be known to be very tricky on a lot of horses, though with Wilkes calling the shots, you know he meticulously planned out this son of Ghostzapper’s route back to Louisville. On paper, he’s clearly the most likely winner, and there should be enough pace for him to rally into as well, but as we saw with ‘Empire last week, what you did at 2 doesn’t really matter a whole lot at 3, especially when there are a lot bigger fish to fry down the road; second-best today.

#9 No Dozing 4-1): Rapidly improving son of Union Rags made a lot of friends when he was a game second to hotshot Mo Town when last seen in Aqueduct’s GII Remsen in November, and it’s a big edge that he’s been here for quite some time with Delacour’s string, as he’s grown very accustomed to the local strip. Versatile runner can be placed anywhere and figures to be midpack, off the speed and ahead of the big horse next door, which will allow him to get first run on the far turn, even though this wide draw did him no favors. And sure, he’s yet to reach McCraken’s level, but his talent is obvious, he’s in the hands of one of the best under-the-radar trainers in the country and seems primed to announce his name on the national scene today; call to post the mild surprise.