#1 Term of Art (20-1): Stretch-runner is the first of three from O’Neill and made his claim to fame by rallying to win an off-the-turf running of the GIII Cecil B. DeMille at Del Mar in November, which isn’t scaring any of the big guns here. Long-striding son of Tiznow couldn’t make up any late ground in the local GIII Robert Lewis last time against tons easier, so he’s going to have trouble making a late dent into the best Triple Crown prep of the year up to this point; figures the best of the rest.

#2 Vending Machine (20-1): Longshot from a potent Miller barn won a minor turf stakes over the local lawn two back, then was a well-beaten sixth on the Tapeta in Golden Gate Fields’ California Derby when last seen in mid-January, so he’s likely in a world of hurt today. If you’re looking for a few positives, it’s that he is 2-for-3 over the track going two turns, and as a son of Hard Spun he’s bred to be a nice horse, but winning a maiden-claimer and optional-claimer isn’t scaring any of the three monsters to his outside; easy toss.

#3 Ann Arbor Eddie (8-1): Pace-presser just missed when second (disqualified to fourth) in GG’s GIII El Camino Real Derby last month and wasn’t that far behind today’s favorite Mastery in Del Mar’s GIII Bob Hope last November, but that runner has moved forward in a big way since then, while this son of Square Eddie seems stuck in neutral. The second from O’Neill is in a tough spot, as he wants to mix it up early but isn’t fast enough to make the point, which means he’ll likely be in chase mode throughout, with three Ferraris carving out the splits early; can’t see this ending well.

#4 Mastery (6-5): Highly accomplished and undefeated runner for Baffert makes his much anticipated 3-year-old debut after a two-year-old campaign that kept getting better, as he aired in his maiden win here, comfortably won the Bob Hope and strolled to a romping win in the GI Los Alamitos Futurity to end his season in December. But before you go assuming it’s time for another easy score, take note that he beat nothing in any of his three wins last year and will have to run a lot faster to beat both Gormley and Iliad, who have already shown they are as good, if not better at three than they were at two, which is something this son of Candy Ride (ARG) has yet to do. So yes, he’s supposed to be favored and has been working lights out for this, but he spots recency to a pair of real tigers, while likely taking all the worst of it as the inside speed, while those two will be lapped on to him from the word go, so, point being, it’s not going to be easy; thinking the streak ends today. 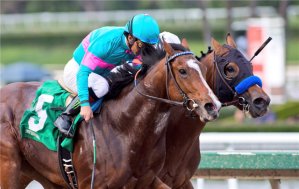 #5 Gormley (9-5): GI-winning 2yo was a game winner of the local GIII Sham in the slop over Baffert’s highly touted American Anthem and figures to be glued to Mastery throughout from this sharp attack post. Son of Malibu Moon erased the debacle that was the Breeders’ Cup Juvenile here in November, as he just never looked comfortable after a rough beginning while checking home sixth in a disappointing effort, especially after he looked so good winning the GI FrontRunner here in October. It was probably wise on Shirreffs’ part to pass the Lewis, as the Sham was basically a match race for a mile, so entering here fresh is a plus, but the gut says he’s a lot more workmanlike, while Mastery and Iliad next door are the brilliant ones; third-best. 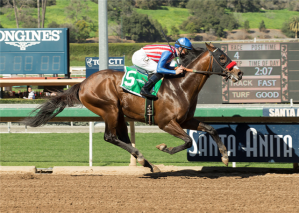 #6 Iliad (5-2): Dangerous new shooter simply looked stunning winning the local GII San Vicente off the break last month, in what was his first start for O’Neill after a two-race juvenile campaign for Baffert that ended with an easy MSW win at Los Alamitos. Son of Ghostzapper will get tested for class and makes his two-turn debut today, and on paper he’s the fastest horse early, but this outside draw gives Prat a lot of options, and as fast as he has run early (sub :45 in each start), it’s also noteworthy that he’s never been in front, either, so you would think that he’s adaptable enough to lay just off of it early. And while there’s no doubt that he meets much tougher today, and two legitimate stars, anyone who saw that last win knows that he’s not going to be too worried about failing the acid test; absolutely love his chances today.

#7 Bluegrass Envy (50-1): Gulfstream Park invader has yet to win in five starts while running for Morales and Abreu and looks completely hopeless in his first start for Creque, so this son of Any Given Saturday is every bit of this 50-1 ML and more; coming to an MCL’er near you soon.