#1 Patch (9-2): The first of two invaders for Pletcher looked good stretching out to a one-turn mile and breaking his maiden in fast time at Gulfstream Park last month and immediately gets the acid test to see where he stands on the national scene. If this was just your normal run-of-the-mill barn, you’d think this son of Union Rags is way out of his element, but considering a trio of his stablemates have already shipped to win graded stakes at Oaklawn Park (twice) and at Tampa Bay Downs, you have to think he’s a major player here, especially since he drew perfectly, and, with the exception of the heavy chalk, the locals aren’t all that imposing; call to post the mild surprise.

#2 Hollywood Handsome (12-1): Improving longshot has the look of a vintage Stewart 3-year-old, in that he doesn’t have a lot of speed but just may be getting good in New Orleans at the right time, á la Golden Soul and Commanding Curve, who both parlayed solid runs in this race into runner-up finishes in the Kentucky Derby. Of course, one thing has nothing to do with the other, but this son of Tapizar didn’t run poorly when a close third in his first start against winners in a local optional-claimer last month, will get a solid pace to rally into and will be running on late; thinking he outruns his odds.

#3 Local Hero (7-2): Tricky read from Asmussen was fancied in the local prep, the GII Risen Star last month, but was borderline uncontrollable on the lead, sped off by six lengths while setting very fast fractions, and predictably had nothing left in the lane to be a well-beaten third, so with plenty of other speed signed on today, he better be a lot kinder in the initial stages if he wants to be around when the real running begins. If nothing else, it’s nice to see them wheel back with this lightly raced son of Hard Spun, and anyone who saw his local MSW win knows there’s a ton of talent here, but as mentioned, the engine is going to be a crowded car and this dude has never passed a horse in his life; tread lightly if you’re coming back here.

#4 Senior Investment (12-1): Stretch-runner for McPeek actually won an optional-claimer here two-back only to be DQ’d for interference, then went to OP and did it the right way in a similar condition but ran slow both times, so he’s open lengths behind the best in here. Son of Discreetly Mine seems to be progressing and no doubt will like the distance and race flow, but unless he takes a sizable move forward, he’s in a tough spot; midpack finish seems his ceiling.

#5 Monaco (12-1): The good news for Pletcher’s second entrant is that he just broke his maiden by 12 at Tampa last time, but the bad news is that they timed that race with a sundial and he’s about 20 lengths behind the major players in here. Of course, not everyone gets too hot and bothered by speed figures, and that was this Uncle Mo colt’s first start at two turns and he is in expert hands, but for once this barn looks completely overmatched; can’t see it. 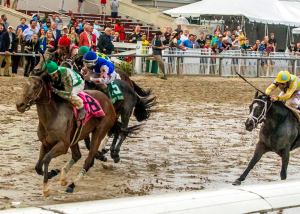 #6 Guest Suite (4-1): Quality Road gelding won the GIII Lecomte two-back, then was run off his feet in the Risen Star and passed a few late, but was never remotely a win threat when fourth, which was a disappointment since he had built a bit of a following. Well, Howard forges on (as he should), and the pace will suit his stalking/closing style, but the gut says he got exposed a bit last time and needs softer to have a shot at getting his picture taken; underneath, if at all.

#7 Sorry Erik (30-1): Son of Wilburn rates as the winningest horse in the field, along with Guest Suite, as he’s hit the line first three times, but that’s about where the positives end, as he was a distant seventh in the Risen Star and has never come close to running a race that would threaten here, let alone win. If you’re a fan, you can point to the fact that Desormeaux blew up the board in New Orleans a few years back when Ive Struck a Nerve won the Risen Star at 135-1, but the chances of lightning striking twice are a lot longer than that; get home safely.

#8 Girvin (8-5): The heavy favorite looked awesome settling early and exploding late to win the Risen Star for fun, in what was his first two-turn start on the main track, and anything close to that effort wins this with similar ease. Rapidly improving son of Tale of Ekati is obviously the horse to beat for Sharp, but he could regress today off such a lifetime best, and the 8-1 last time is now traded in for about 7-5 Saturday, which brings to mind that old “wedding and a funeral” racetrack adage. But still, regardless of what you think of him, there’s little doubt that the path to the winner’s circle goes through this dude; figures a real handful.

#9 Hotfoot (30-1): Girvin’s stablemate and expected rabbit just failed miserably at 6/5 in the slop after dueling on the lead in a local optional-claimer and has only one task, which is to go as fast as he can for as far as he can for his buddy next door. Son of Aikenite did look good winning off the claim for Sharp two-back, but that was in a starter-allowance, so it’s pretty obvious he’s got only one thing in mind here; adds plenty of fuel to the early fire.