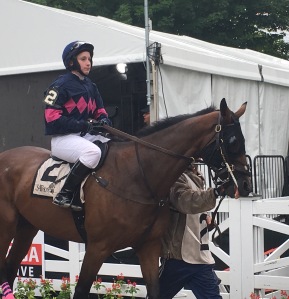 Brion and All the Way Jose

On the morning of July 27, Keri Brion sat on a golf cart on Saratoga’s backstretch and glumly watched torrents of rain soak the turf course. She was scheduled in a few hours to ride her first race at Saratoga, in the Grade 1, $150,000 A.P. Smithwick, no less, but with incessant rain forecast for the next few hours, it looked like that debut might be delayed.

Assistant to Hall of Fame trainer Jonathan Sheppard, Brion had decided in early 2016 that she wanted to give riding one more shot. In 2015, she rode just once; last year, she picked up 23 mounts in jump races, earning $74,190. This year, in 12 races, she’s already surpassed that total.

“At the beginning of last year, I decided to give this one more go, and if I didn’t win a sanctioned race, I was going to stop trying,” she said, standing near Sheppard’s Saratoga barn the day before the race.

“Sanctioned races” are designated by the National Steeplechase Association, and they don’t include the point-to-point races in which Brion had long competed. But in April of 2016, Brion got what she calls her “big break” when Sheppard put her on Lune de Caro in the Glenwood Park at Middleburg. They finished third, but won a month later at Percy Warner in Tennessee.

“I don’t want to play the ‘girl card,’” she said, “but a lot of this game is about getting the right opportunities, and I was riding some not-very-good horses and having stupid falls, and I know people were saying, ‘She’s just not cut out to ride horses.’

“I’m a competitive person, so that was hard to accept and move on.”