Firenze Fire and Manny Franco in the Jerome. NYRA/Chelsea Durand

#1 Firenze Fire (9-5): By far the most accomplished member of the field was all-out to get up to win the local Jerome in the mud in what was his first start since he didn’t fire while running a disappointing seventh in the Breeders’ Cup Juvenile at Santa Anita in November, which is his only two-turn start to date. Stretch-running son of Poseidon’s Warrior looked good closing from the clouds to win the GI Champagne at Belmont last fall for Servis but got a perfect set-up that day, something that doesn’t appear to be the case here. And that’s before we mention how dicey a proposition he seems to be going this far and at two turns, which means he’s a big underlay at this number; trying to get out of the exacta.

#2 Marconi (3-1): Fellow big underlay was an unimpressive open-length winner (which is hard to do) over the track and distance last time and now gets thrown right into the wolves by Pletcher, as he faces winners for the first time. Now, to be fair, this isn’t the saltiest GIII you’re going to see this winter, you do have to start somewhere, and when Coolmore pays $2 million for a son of Tapit, you know they didn’t do it so he could sit in the barn. Grinder obviously has some talent, and he’s a name to remember, but the gut says it will be later this summer in the Belmont, and not this winter and spring on the Derby Trail; playing against.

#3 Bal Harbour (6-1): Price player was left in the wake of the highly touted Mask down at Gulfstream Park, when he was a “someone had to be second” in the Mucho Macho Man last month, though he was well clear of Dak Attack, a horse Romans has said is his best 3yo. Tactical son of First Samurai did win the two-turn Sapling at Monmouth Park last summer, and it’s never wise to ignore Pletcher in a spot like this, though it’s worth noting he’s yet to break through after seven starts, so you have to think he plays another supporting role today; second-best. 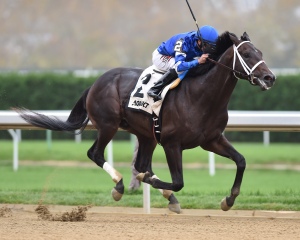 Avery Island and Joe Bravo in the Nashua. NYRA/Alysse Jacobs

#4 Avery Island (8-5): The horse to beat makes his highly anticipated 3yo debut after winning the local GII Nashua in a romp, then chasing Catholic Boy home in the track and distance GII Remsen when last seen in November. Beautifully-bred son of Street Sense should sit a dream trip, as there’s sprint speed to his outside and not much other lick in here, and that’s not only going to put him in the right spot off the far turn, but it’s going to give him a huge race flow edge on his (perceived) main rival down inside. Obviously McLaughlin has big goals for this colt, and this is just the jumping-off point, but those works whisper “ready,” and there’s just nothing here to be scared of; can’t see him losing to a group like this.

#5 Coltandmississippi (12-1): The last of the Pletcher trio is also the least accomplished and thought-of, and he was well-beaten by ‘Fire in the Jerome, so to turn the tables on him, while facing a serious new shooter, is asking a lot. On the plus side, as a son of Pioneerof the Nile, he’s bred to relish two turns, and as this is his first try at it, he could move up, but even so, it won’t be enough; not seeing it.

#6 California Night (15-1): The speed will be in front and take them as far as he can, and he did look good wiring a 6 1/2-furlong MSW on debut for Maker, though this is one tough ask to go from that spot to taking on winners and trying two turns. Dad Midnight Lute was thought of as a sprinter, but he’s getting two-turn types, too, so that augurs well, and, aside from the pick, there’s no one else here to keep him honest early, but even so, this is just too big of an ask; know him early.

2 thoughts on “The Road to the Triple Crown with Brian Nadeau: The Withers”