#1 My Boy Jack (12-1): California invader was a well-beaten third in Santa Anita’s GIII Sham to Baffert hotshot McKinzie, who is atop several Derby lists at this point, so that run should give him some seasoning as he makes his second start of the year. Versatile son of Creative Cause drew well here, and the Sham was his first two-turn start on the dirt, too, so there’s room for improvement, though he’ll need it if he wants to play with the top guns today. It’s probably a wise move by Desormeaux to leave town, as there are some real heavyweights out west, while the locals have yet to sort themselves out, though that still doesn’t mean he’s a top threat here; fringe player. 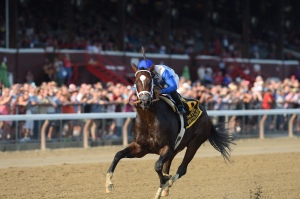 #2 Sporting Chance (9-2): The wildcard is one of several snazzy 2-year-olds that will make their much anticipated 3-year-old debut in the coming weeks, and this Tiznow colt will do it off a September layoff and minor injury, so there are obviously some hurdles today. Of course, that last start in September resulted in a win in Saratoga’s GI Hopeful, and we saw Saturday in Fair Grounds’ GII Risen Star with Bravazo that the Lukas sophomores mean business this year, and judging by those AM drills, this guy is tearing the barn down. There are a few worries, though, as he’s yet to run two turns and there’s plenty of speed to his outside, though he is the most talented horse in here, and if he wins this off this kind of break, there’s going to be hell to pay down the road; scary, scary, scary.

#4 Mourinho (2-1): The chalk continued a trend for Baffert that has stretched several years now, as he came from California to annex an Oaklawn stakes when he comfortably won last month’s local prep, the Smarty Jones, and he did it in fast time, too, so he’s clearly the one to beat today. Son of Super Saver walked on the lead that day, and that won’t be the case with ‘Chance to his inside, but he’s seemingly just as comfortable stalking the pace, as he did earlier in his career. The waters do get deeper today, as this is a tougher field, but he’s the kill of the local hill until proven otherwise, and catches his main danger at the right time; call right back.

#5 Road to Damascus (15-1): Lightly-raced Pletcher runner was all-out to break his maiden at Tampa Bay Downs, which isn’t a ringing endorsement of his chances here, though that was only his second lifetime start, and first at two turns, so he obviously has room for improvement. Tactical sort should be close early and tracking the speed, and that seems like the right spot to be in here, and as a son of Pioneerof the Nile, he’s bred to only get better with more distance and maturity. This is a big step up, though, and while this barn rarely calls the wrong shots, this seems like a big reach; not seeing it.

#6 Seven Trumpets (10-1): One of many talented 3yos Romans has this year enters off a close second behind the accomplished Firenze Fire in the mud in Aqueduct’s Jerome, but that’s not really going to scare anyone in here, especially considering he blew a 2-length late lead. Versatile son of Morning Line likely won’t be on the lead today, but he stalked and won his two prior starts, so that’s a position he’s accustomed to, and it means he should trip out nicely. The price will be right if you believe, but this field is a lot deeper than the Jerome, and his fast track runs up to this point don’t give him much hope; tough to tout.

#7 Retirement Fund (15-1): Undefeated Asmussen charge figures to be a major pace player, as he’s wired in both career starts going two turns at FG and will now get the acid test while making his stakes debut. Long-striding son of Eskendereya has done everything they’ve asked up to this point and this is the next logical progression, and he’s like several in here that are looking to find out where they stack up locally and in the stakes ranks. On the face of it, he does look like the type who will be a player in a race like this at some point, but asking him to chase a GI winner, put him away off the far turn, and keep a salty local stakes winner at bay seems like a daunting proposition; know him early, not sure about late.

#8 Zing Zang (15-1): Deep-closer passed a bunch in a non-threatening fourth in FG’s GIII Lecomte last time, but that seemingly decent effort is now under question, as the top two—Instilled Regard and Principe Guilherme—were highly disappointing in the Risen Star, running fourth and seventh respectively, at low odds. The second from Asmussen is bred to be a nice one, as dad Tapit is setting the world on fire as a sire, and his style does fit the race flow today, as there’s plenty of heat up front, and the Lecomte was his first start against winners, so he has a right to improve today. Fans of the barn will get their guy at a rare big number, and if he improves again, he’s hardly impossible for a piece, though that seems to be his ceiling; could add some spice to your exotics.

#9 Kentucky Club (30-1): Lukas’ second was scratched out of the Risen Star to run here, but he was about 50-1 in that one, and this is arguably a tougher field, so he’s got his work cut out for him. On the plus side, he does enter off a breakthrough romp by eight last month in a local maiden-claimer, in his first start since November, too, so he does appear to have turned the corner. But that did come in the slop, and a repeat doesn’t come close to making a dent in here, so he’s a huge bomb, even for a trainer who has built a career with putting these types over; easy toss.

#10 Combatant (6-1): Smarty Jones runner-up and the most accomplished of the Asmussen trio built upon his second in the Springboard Mile at Remington Park in December and really moved forward with a big figure, so he rates as a huge player in here. The wide draw did him no favors, but he does seem tactical enough to work out a decent position into the first turn, though a wide run would certainly damage his chances. Son of Scat Daddy has improved in every start and gives no indication that he’s slowing down entering this one, so you better give him a long look, at what could be an overlaid price too; very dangerous.

#11 Ezmosh (12-1): Son of Tizway could be the buzz horse, as he was a much-improved second in his seasonal debut in an AOC here last month, and was just a neck behind Bravazo, who shocked them in New Orleans yesterday. Expected pace player ran hard on the lead last time and will have to go from this wide draw today, so he’s yet another that is expected to add some fuel to what already appears like a pretty hot fire up front. Cox is having a great meet and is a name that’s starting to get noticed nationally, but this colt looks like he’s biting off a bit more than he can chew; pop and stop seems in the cards.