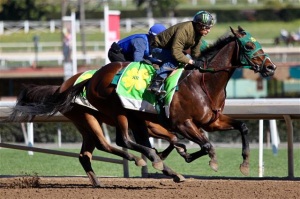 #1 Bolt d’Oro (2-1): The long awaited 3-year-old debut is at hand for this son of Medaglia d’Oro, who was a deserving odds-on favorite when last seen in the Breeders’ Cup Juvenile at Del Mar in November but was robbed of any winning chance from a poor outside draw, slow break and extremely wide trip when a distant third. Ruis regrouped, dealing with some minor ailments along the way, and pointed here, and it’s been pretty smooth sailing of late, with those last two works sure hinting he’s sitting on edge, and he’ll have to be, as there’s a potential monster a few stalls down. The post could be a little tricky, but there’s enough speed in here where he can break running and then work to get position on the backstretch, and anyone who saw his GI FrontRunner win over the track and distance prior to the BC knows just how special an animal this is, so assuming he can handle what will reportedly be a wet track (heavy rains have hit the area all week), all signs point to this colt running a real corker; time to reassert his dominance.

#2 Lombo (8-1): Speedster made the front then forgot to stop in the local GIII Robert Lewis last month and will likely employ the same tactics today, though there will be no free passes on the engine as there’s plenty of early lick to his outside. Rapidly improving son of Graydar has come to hand quickly for Pender, and it’s worth noting that that was his first two-turn start last time, so he needs to be commended with the way he handled it. Now, with that being said, he beat today’s fellow rival Ayacara, who seems like a 15-1 shot in here, so this is a seismic rise in class, all while facing an expected negative race flow, so duplicating that last win seems highly implausible; comes unglued in the lane.

#3 Ayacara (8-1): Aforementioned stretch-runner ran on nicely for the place last time when he got no real pace help yet still put in a brave charge to make up 9 lengths on Lombo while finishing well ahead of third. The good news is that the pace should be a lot more to his liking today, and that’s going to flatter his deep-closing style, though the bad news that is this son of Violence is still about 10-15 lengths behind the big boys on paper, which means they could go ballistic early and it still won’t matter, especially since the two heavy favorites are going to sit dream trips just off the speed and get first run on this colt off the far turn. Desormeaux once again shows up with a bargain (sold for 85k as a yearling), and he’s already pulled off an upset on the Derby Trail with a closer this year, when My Boy Jack annexed the GIII Southwest at Oaklawn Park, but it’s hard to see him completing the double here; rallies for a small slice. 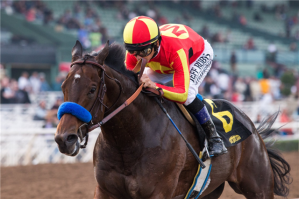 McKinzie and Mike Smith in the Sham. Zoe Metz Photography

#4 McKinzie (8-5): Surprising ML favorite is undefeated for Baffert (though he needed to be moved up from second in the GI Los Alamitos Futurity in December) and has a recency edge on the pick, as he won the local GIII Sham in January. Tactical son of Street Sense also has the benefit of a better draw, as Smith could potentially employ some race riding tactics and try and keep the big horse down inside hemmed in, and that could certainly be the difference in what figures to be a real thriller. On the face of it, there are a lot of angles working in his favor, and those recent AM drills say he’s tearing down the barn, but while the rail has been brilliant, this colt has been more workmanlike, and that may be the difference today; loses for real this time.

#5 Aquila (15-1): Impressive local track and distance winner wired maidens last month and really gets thrown to the wolves today while facing winners and graded foes for the first time, with a seemingly tough pace scenario to deal with, too. At least he proved when second two-back that he doesn’t have to have the lead to win, but it worked perfectly last time, so it’s doubtful they try to take this son of Union Rags out of his best game. Callaghan has shown he knows what to do with a big horse the past few years and is a rising star in the profession, and this colt probably has a stakes win in him this year, but this will not be the spot; pace player only.

#6 Calexman (30-1): Ginormous longshot should be 99-1 on the ML, as he has no chance to make a dent other than early as a pace nuisance, which is what he did before throwing down anchor while eighth over the Tapeta in the El Camino Real Derby at Golden Gate Fields last time. Son of Midshipman starts for a Cerin barn that is having a fine meet, but there’s zero chance this colt adds to it; next.

#7 Peace (15-1): Pricey son of Violence was 2-1 in the Lewis but ran like he was 20-1, as he was further off the pace than usual and came home a well-beaten fifth after adding blinkers for the first time. It’s good to see Mandella forge on, and the hood comes off today, so maybe he can get back to his first three starts without them, which were solid runs (3-1-2-0), though not the type that would threaten here. You rarely get this Hall of Fame barn at a big number, so that’s worth considering, but that’s still not enough to get anything more than a minor award today; tough to tout.

#8 Kanthaka (4-1): The wildcard sat off a crazy pace, then closed like a freight train to win the local GII San Vicente going away last month at 7 furlongs and will now tackle two turns for the first time. The wide draw did him no favors, and if you adjust where he was in terms of the pace sprinting, he’s actually as fast, if not faster, than anyone in here early, so it will be interesting to see what Prat elects to do. Fellow Hall of Famer Hollendorfer is calling the shots here and apparently decided to stay home instead of shipping for the one-turn GIII Gotham earlier today at Aqueduct (see the race preview on the website), so that says that he thinks this son of Jimmy Creed is a player here, but it’s a mighty tall order to beat two possible freaks at their own game; the king of the mountain if he handles this huge ask.