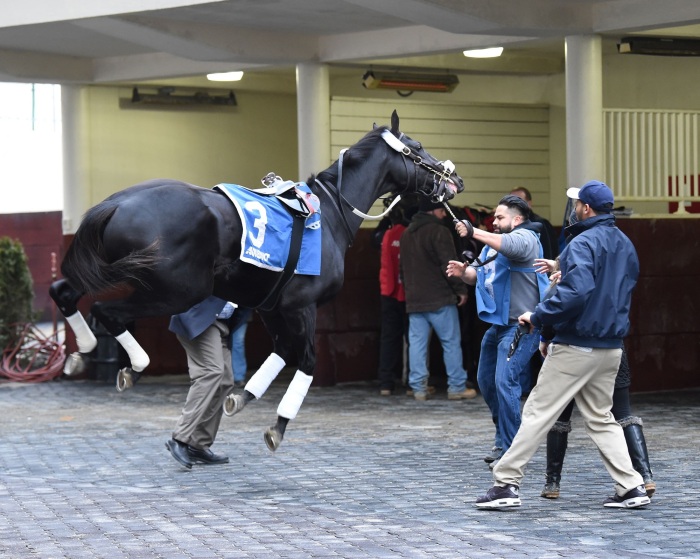 Independence Hall kickin’ it in the paddock before the Jerome Stakes at Aqueduct. Photo: NYRA/Susie Raisher

#1 Ajaaweed (4-1): Highly regarded Shadwell homebred was a wiseguy runner in the GI Breeders’ Futurity at Keeneland but was a well-beaten fourth, then rebounded nicely for a sharp second over 1 1/8 miles to end his 2-year-old season in the GII Remsen at Aqueduct in November. He gets some extra credit for that run, too, as he closed from seventh over a very speed-favoring track, one that the winner Shotski used to his advantage. McLaughlin-trained son of Curlin has a ton of talent, and this is just a jumping-off point to what they hope will be a big year, but he drew well and should get some pace to rally into, so he looks primed; call to post the mild surprise.

#2 Solo Volante (8-1): Stretch-runner was 2-for-2 on the turf in South Florida, then tried the dirt and was a closing third in the one-turn Mucho Macho Man behind Chance It, who is a highly accomplished runner. Son of Karakontie (Jpn) isn’t really bred for the main or the two turns, but he keeps outrunning his odds, and his running style suggests this trip will be to his liking, and the pace here should as well. Up to this point he’s done nothing wrong, and he keeps outrunning his odds, too, so you could do worse than giving him another longshot look; eligible to pass a lot in the lane.

#3 Albert Park (15-1): Godolphin homebred was a good second in the local prep, the Pasco, behind a rousing winner, and will try two turns on the dirt for the first time, something a son of Street Sense should relish. Tactical sort sprinting should be one of several potential pace players here on the stretch-out, and Stidham is a big 30% at the meet, so you have to respect this one, but at this point, and with a potentially tricky race flow scenario, others look a bit better; underneath, if at all.

#4 Independence Hall (6-5): Stiff favorite and one of the speeds here wowed the racing world when he won by the length of the stretch in Aqueduct’s GIII Nashua in November, then was more workmanlike winning their Jerome on New Year’s Day to kick off his campaign. Undefeated son of Constitution is 3-for-3 for Trombetta and has done nothing wrong while winning for fun in all three starts, but there are some hurdles today, as he meets other speed and tries two turns as well. So sure, the Nashua win was stratospheric, but the two wins around it were relatively pedestrian on the stopwatch and no better than anything anyone else has done here, yet you’re going to have to take a short price because of the former, while the latter could be more closer to the norm; second-best.

#5 No Getting Over Me (20-1): Track and distance two-turn winner on debut was a distant third in the Pasco, though only 1 1/2 lengths behind ‘Park, so he has his work cut out for him here. Son of He’s Had Enough goes for a solid local Bennett barn, and he figures to win some races this year, but this won’t be one of them; not seeing it.

#6 Premier Star (3-1): Potential speed of the speed brings a 2-for-2 sprint record from the other coast, as he easily won an MSW and AOC at Gulfstream Park to kick off his career for Navarro. Son of multiple graded stakes winner Tapiture is bred for this, and you know he’ll be winging early, but there’s pace to both sides of him, and he’ll be overbet while getting a lot thrown at him, so let’s make him prove it before backing; know him early, not sure about late.

#7 Tiz Rye Time (20-1): Longshot is an intriguing entry for Wilkes, who rarely runs them where they don’t belong, and judging him off that distant fourth at GP in an AOC last time, he’s out of his element here. That being said, this stalking son of Tiznow will be a big, big price, and if the sprinter/milers get too hot and bothered early and therefore tire each other out late, he could be along for a small share; may outrun his odds.

#8 Chapalu (8-1): Well-travelled runner started sprinting on the turf at Laurel, broke his maiden on the grass going two turns at Keeneland, then went north to Woodbine to win their GIII Grey Stakes on the Tapeta in December to end his 2yo campaign. That’s a lot of miles and an impressive resume in your first season of racing, and this son of Flatter is certainly bred to handle this initial dirt test as well. Delacour has made a name for himself the past several seasons, and this colt could trip out nicely off the speed here, too, and sure, he’s spotting a lot of experience to these, but he’s done everything they’ve asked so far, so there’s reason to believe he could handle this test, too; do not ignore.