Brian handicaps at Capital OTB and Horseplayer Now, and he’ll offer analysis and selections of Derby points races, hoping to make us all a little money as we head to the Belmont Stakes. Here’s his analysis of the second division of the Risen Star, and follow him on Twitter here. 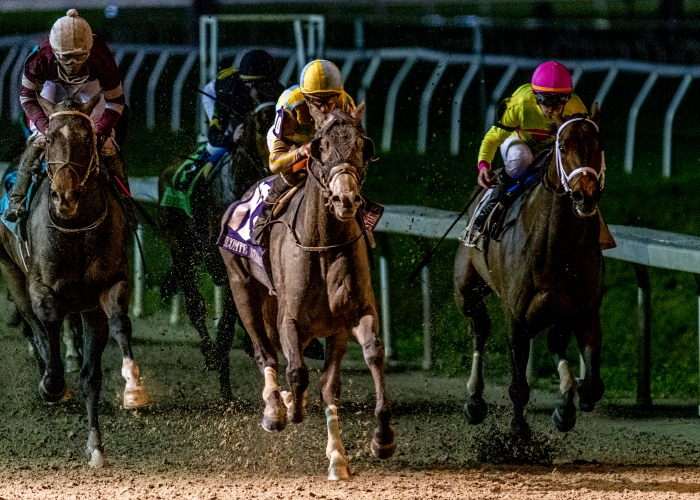 #1 Digital (6-1): Lightly raced son of Into Mischief really took to two turns when second to fellow rival Blackberry Wine in a highly rated and fast local AOC last time and owns a stalking gear that should come in handy from this perfect draw. The first of two for Calhoun also tried a fast main track for the first time in that run last month, and, considering how much he improved, it’s safe to say he’s a huge threat here if you judge him solely off that effort. Yes, the waters obviously get a lot deeper, and he’s got to turn the tables on the horse that beat him while also bettering one that won the GIII Lecomte, the local prep, but this dude has the look of a colt that is getting good in a hurry; call to post the mild surprise.

#2 Silver State (4-1): The first of five to exit the Lecomte had a trip that day, as he didn’t get away cleanly then played bumper cars before rallying six-wide off the far turn in what turned out to be a very good second for Asmussen. Hard Spun colt is another that drew well and figures to be closer early with an alert beginning, and that means he won’t be spotting key tactical position today, which certainly didn’t help matters last time. That was also his first start at two turns, so he’s eligible to move forward off that, and he’s clearly in the right hands, too, so don’t be surprised if he puts it all together here; huge chance.

#3 Ready to Roll (20-1): Calhoun’s second is also the first of two recent MSW winners, so it’s pretty clear he’s got his work cut out for him here, though the romp in the mud here last month—his first start at two turns—was clearly a breakthrough effort. Speedy son of City Zip looks like the inside speed here, and that worked last time, but wiring this group is another challenge altogether; pop and stop seems likely.

#4 Perfect Revenge (20-1): Huge longshot was a distant second in an SOC at Gulfstream Park last time off the claim for Joseph, though he did move forward on figures, even if he disappointed as the favorite. Stalking son of I Want Revenge will probably make a few dollars this year for his new connections, but he looks like he’s here because there was a spot on the plane next to his more accomplished stablemate Ny Traffic, who has a puncher’s chance in the second division of this race; easy toss.

#5 Moon Over Miami (10-1): Fellow GP shipper didn’t fire in an AOC there going two turns behind Ny Traffic in his two-turn debut last month, so it’s a bit noteworthy that the normally patient Mott ships here off such a dud. Well-bred son of Malibu Moon is one of many in here that seemingly want to stalk from close range, and that gaudy Aqueduct MSW win two-back would make him a player today, but you wonder if that was more the exception than the rule; demand fair value if you’re in a forgiving mood.

#6 Shashashakemeup (20-1): Pace player was a dueling sixth in the Lecomte and will need a quick reversal of fortune if he wants to turn the tables for Desormeaux. Backers will note that that was this son of Shackleford’s two-turn debut, and that this is a barn that can put over some big surprises on the Triple Crown trail, but off that last, with speed to both sides, he’s tough to tout; not seeing it.

#7 Blackberry Wine (5-1): Heavy hitter for Sharp was clear of Digital in his very impressive AOC win last month, which moved his record to 2-for-2 going two turns on the dirt. Of course, as good as that win was, you can pick it apart a bit, too, as this Calumet homebred son of Oxbow got loose on the lead through soft fractions, which is not a scenario he’ll encounter today, as he’s going to have to run a lot faster early if he’s going to make the point. And therein lies the rub, as he’s wired in both wins and is 0-for-4 when he doesn’t make the lead, so sure, he’s a big threat here, but he might be a bit dressed up with nowhere to go, too; making him prove it.

#8 Enforceable (7-2): Stretch-running Tapit colt inhaled the Lecomte field with a rush in what was a breakthrough run for Casse after a busy but middling 1-for-6 campaign as a 2-year-old. He gets more bonus points, too, as not only is he a local graded stakes winner, but he’s also the only horse to run this far, and that resulted in an MSW win at Saratoga in August, which is no easy feat that early in your career. The pace looks promising for him again, and you know he’s going to love this trip more than anyone, so while he does need to back that effort up, there’s no reason to think he won’t; rock solid.

#9 Mr. Monomoy (6-1): Expected outside presser was a grinding third in the Lecomte and is going in the right direction for Cox, who looks like he’s got another quality runner to add to his burgeoning stable. There’s also some pedigree at play here, too, as he’s a half-brother to superstar and champion Monomoy Girl, so he’s eligible to be any kind, though at this point that’s just wishful thinking off what he’s done up to now. That being said, he’s still improving, should offer fair value, and has a right to trip out in this bulky field; price players have their hero.

#10 Farmington Road (8-1) Tampa invader took the road less travelled to break his maiden last month, though he did it the right way in what was his two-turn debut, which is the exact path Pletcher took with Always Dreaming, who used a two-turn Tampa MSW win as a springboard to a win in the GI Florida Derby and subsequently the Kentucky Derby. And while that’s got nothing to do with this Quality Road colt, the point is that it’s worked before, for a barn that is as potent as any in these Triple Crown preps; worth remembering this name.

#11 Scabbard (12-1): Useful 2yo was a meek fifth in the Lecomte and seems to be stuck in neutral a bit, as he hasn’t really gone on since some solid summer graded stakes runs last year. Son of More Than Ready forges on for Kenneally, and he has a right to improve off that local return, and that second to hotshot Dennis’ Moment in Churchill Downs’ GII Kentucky Jockey Club in November would give him a chance here, but that seems to be a bit of an outlier when viewed in context with the rest of his form; tough to tout.