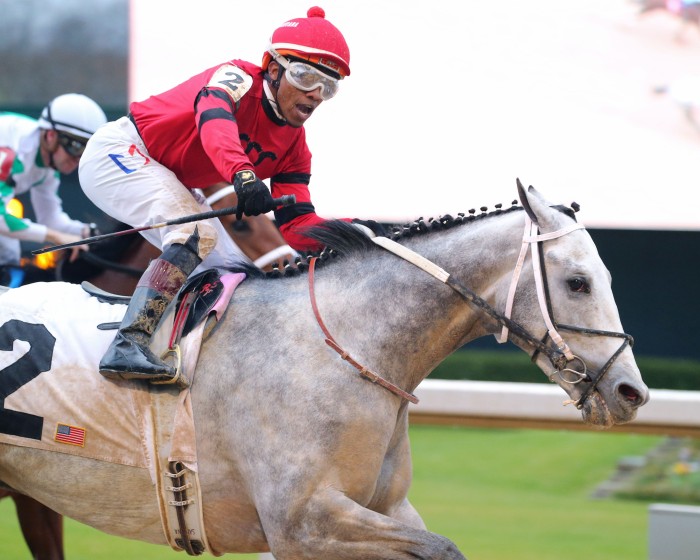 #1 Nadal (5-2): Yet another potential freak for Baffert made it 2-for-2 sprinting when he won the GII San Vicente at Santa Anita last month after dueling early then smartly pulling away late, though you’re allowed to question how much he had left in the tank. Pricey son of Blame takes the blinkers off today, though this rail draw and his sprint speed say he’s likely going early, which puts him in a tough spot, since there’s definitely some pace to his outside. He’s clearly the most talented horse here, and this barn has won droves of these Oaklawn 3-year-old stakes in the past, but stretching out to two turns, while facing tons better, with a tricky pace scenario, and a price that will probably be around 7-5, doesn’t make him a great play at the window; hoping for a double fault.

#2 Excession (30-1): The first of three for Asmussen was a non-factor when eighth in Fair Grounds’ GII Risen Star last month, which followed a seventh in their GIII Lecomte in January, and neither of those runs make this son of Union Rags any kind of threat here; next.

#3 Basin (3-1): The wildcard hasn’t been out since romping in Saratoga’s GI Hopeful over a sloppy track in September, so this is a tough ask off the extended break, while trying two turns for the first time, too. Still, it’s a confident move by Asmussen, and you have to start somewhere, and when you’re a son of Liam’s Map, this is a trip that’s supposed to be right up your alley, too. Tactical sort sprinting should be keyed up on the stretch-out, so he should trip out, and he’s clearly got talent, but no one behind him at the Spa is much of a runner, and the hurdles here are sizable; tabbing down the road.

#4 Silver Prospector (7-2): Asmussen’s third was an impressive winner of last month’s local prep, the GIII Southwest, when he bided his time and punched through off the turn to win going away in what was far and away a career-best performance. Bounce fans will be out in full force here, but take note that that win was his first two-turn start on a fast track, so there’s a chance that that was his true self, as opposed to a one-race exception to the rule. The biggest positive here, however, is this son of Declaration of War’s tactical style, which will have him sitting just off the speed and looking to make his move off the far turn, a tactic he worked with aplomb last time; call to double up.

#5 No Parole (8-1): Expected pace player is 3-for-3 for Amoss and has won those by a combined 34 lengths, though he clearly gets the acid test today, as all three wins, including the Night Prince last month at Delta Downs, have come against Louisiana-breds. Violence colt has never been behind another at the pace call, so he’s obviously going to be winging today, but as hinted at, that doesn’t appear to be a recipe for success in this spot; pace player only.

#6 Three Technique (7-2): Stalker tried two turns in the local Smarty Jones in January and ran well to be second in the slop, though race winner Gold Street was a nowhere ninth in the Southwest, which clouds the vision here a bit. Still, this son of Mr Speaker answered the bell, as that was his stakes debut and first start outside of New York for Jeremiah and Coach Parcells, so while the race might not have been flattered, there’s plenty of reason for optimism here. He’s also another that should like the race flow, and he’s now making his second start of the year and second at two turns, so you’re allowed to think improvement is forthcoming; not just for Giants fans.

#7 Coach Bahe (30-1): Stretch-running longshot was up in time to break his maiden in the mud at FG last time and adds Lasix here for Bauer, and while the pace could help this son of Take Charge Indy, he still seems way, way out of his element; tough to like.

#8 American Theorem (6-1): California invader hasn’t been seen since a distant second to Eight Rings (subsequently beaten a football field in the Breeders’ Cup Juvenile) in the GI American Pharoah named after his sire at SA in September, which came on the heels of a sharp closing sprint win on debut there in August, so, if nothing else, he sure is another interesting fresh new face here. It’s hardly a surprise that Papaprodromou decided to hit the road, as there are some tigers out West, and the road less traveled can still get you to Louisville on the first Saturday in May, but the post and layoff are worries, so while there’s talent here, it may not come out today; remember the name.