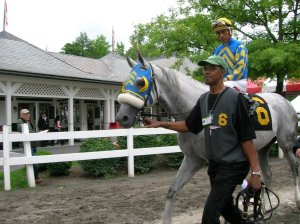 And then on Thursday I find out that he’s finished second, and I watch the replay, and I think, “How can I NOT write about him? Is there a better story out there?”

And I probably will…but not tonight, because Evening Attire’s performance on a Thursday afternoon at Belmont deserves a little recognition, in this pre-Preakness madness.

Evening Attire had Cornelio Velasquez today, for the first time since last August, and as the gelding’s wont, he came out of the gate slowly. His chart reads, “hesitated start.” Well, yes. Surely the chart writer could come up with something better than that? He could have written it without even watching the race!

Evening Attire was last through most of the race; the front runners ambled along, and watching Evening Attire going around the clubhouse turn, you might have thought that he was out for a lazy gallop instead of in a horse race. On the backstretch, he trailed by at least twelve lengths at one point.

But he knows his job, and as he came around the turn, he made up ground and picked up horses, moving down the stretch to comfortably get second. He raced in more laudable company over the winter, on Saturdays, and sometimes in graded stakes; this Thursday field is a notch below his recent competition. But the purse was 75K, and he brought home $15,000 for his afternoon’s work, which is a lot more than most of us can say.

So maybe it’s the same old story, and maybe there’s not a lot new to add to Evening Attire lore…but over the last few weeks, we’ve been hard-pressed to find an unabashedly feel-good racing story, and Evening Attire has seldom failed to provide us with one, even when he finishes up the track. So as long as he keeps trying, I figure it’s the least I can do to recognize his accomplishments and his efforts, for as long as we’re lucky enough to have him around.

4 thoughts on “Hanging in there”