I arrived at 8:45 to watch workouts and meet up with friends. 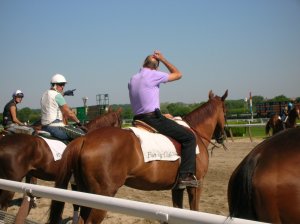 And we saw Tomcito three times: once on his way to his workout… 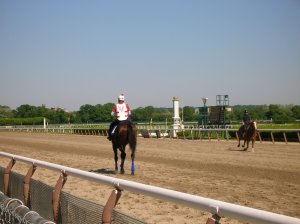 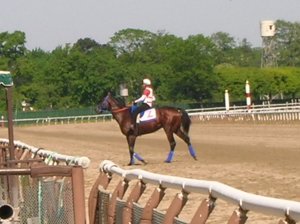 once on his first time around the track…

and then again on his SECOND time around the mile and a half track!

Christophe Clement worked quite a few horses, and as he wandered the apron, he called out instructions en francais to one of his riders. He told us that Rewrite is doing well and is pointed to a stakes race at Saratoga this summer.

We went to the backstretch, where we pit-stopped in the track kitchen, and one of our party overheard a conversation in which Dr. Ian McKinlay, Big Brown’s foot specialist, spoke with confidence about the horse’s condition.

Then we visited Pat Kelly’s barn, where I got to pet Evening Attire. I was maybe as excited about this as Post Parade was about her photo with Bob Baffert… 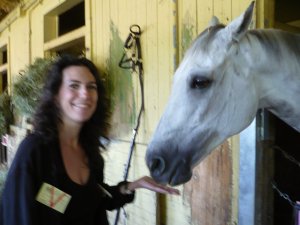 And on our way off the backstretch, we stopped by Big Brown’s barn, just in time to catch this little press conference, in which Dr. McKinlay, 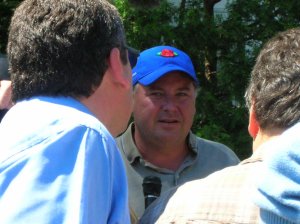 and Michael Iavarone (who actually removed his sunglasses) spoke to members of the press from ESPN (Jeannine Edwards), The Blood-Horse (Steve Haskin), and the Daily Racing Form (Dave Grening) among others…including Railbird and me. What we heard didn’t exactly match with what we’ve seen reported; Railbird took copious notes and I’m hoping that she’ll file her thoughts/impressions later.

At the races, we joined up with Ernie, who hung with Bobby Frankel, and with Sam the Bugler, 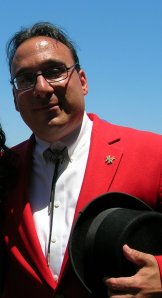 who confirmed that he did indeed comment on this blog last week, and that he LOVED playing at Pimlico.

We were happy to see a crowded, happy Belmont Park (official crowd: 12,562); both the apron and the backyard were full of families picnicking, gangs of friends hanging out, and serious horseplayers playing. (We were less happy to think of the same scene ten days hence, when the crowd will be ten times bigger, and the bathrooms ten times more crowded, and the betting and beer lines ten times longer.)

The Met Mile was a great race, and congratulations to the winner, Divine Park…

the seven-year-old gelding who ran a gutsy race and almost hung on after turning back First Defense’s challenge.

I left at 6 pm, more than nine hours after I’d arrived; there wasn’t much traffic heading for home, and I found a parking space within minutes of arriving in my neighborhood.

Who could ask for a more perfect Memorial Day?

Many thanks to Lynne Veitch, reader and new friend, who made much of today’s magic possible.

5 thoughts on “Sights and Sounds from Belmont Park”