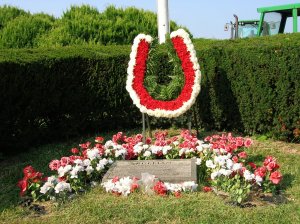 Weather permitting, the Ruffian will be run at Belmont this afternoon. With fresh flowers on Ruffian’s grave in the infield, nine fillies will go to the post to contest the mile and a sixteenth race on the dirt. The race used to be the second in the Belmont fall filly series, the first the Maskette (later re-named the Go For Wand) and the third the Beldame. In 1985, Lady’s Secret won all three races, beating older fillies and mares, becoming the first filly to sweep the series; in 1986, she did it again en route to being named Horse of the Year. She’s still the only filly to have won the fall filly triple crown.

As a three-year-old, this daughter of Secretariat battled with Mom’s Command for preeminence in the division. The latter had swept the filly triple crown series, a/k/a the Triple Tiara (the Acorn, Mother Goose, Coaching Club American Oaks), but Lady’s Secret dominated the fall, and Mom’s Command’s injury and subsequent retirement in the fall of her three-year-old season brought their rivalry to a premature close; each filly beat the other once, with Mom’s Command taking three-year-old filly honors in 1985.

The grey Lady’s Secret captured the public’s imagination with her dominance as a four-year-old, evoking the sorts of gushing and superlatives that we reserve for super-horses; following her record-setting win in the Ruffian as a four-year-old, trainer D. Wayne Lukas said,

“They ought to bronze Lady’s Secret and put her right next to her daddy in the
[Belmont] paddock…She just takes your breath away. She is mind boggling” (Crist,
“Lady’s Secret Sets Record”).

Any doubts that Lady’s Secret is among the best fillies ever to race were
erased yesterday when the daughter of Secretariat carried 129 pounds to an
eight-length victory while winning the $230,400 Ruffian Handicap…

A little bundle of energy who barely clears 15 hands and doesn’t weigh more than
800 pounds, she looks dainty and feminine and delicate—and a whole bunch of
other words commonly used in women’s intimate-apparel ads. What Lady’s Secret
did not look like was a horse who had just come off a tough race. She looked
like a champion on her way to a race.

In the same article, Stathoplos quotes Woody Stephens: “’She is the greatest filly I’ve ever seen, and I’ve been around for a while…I thought Ruffian was the best until I saw Lady’s Secret this season. She’s the best of the best.’”

Earlier in 1986, she had beaten boys in the Whitney, finished second in the Woodward, and finished third in the Iselin and Met Mile. While considered a cinch for champion older filly, those losses to colts created skeptics about her worthiness as Horse of the Year.

Following her win in the Ruffian in September of 1986, Lady’s Secret once again captured the Beldame and the fall filly triple crown, but her somewhat lackluster performance in that race dimmed her reputation. As Crist wrote in the New York Times, “[The Breeders’ Cup Distaff] will be her next start…this year, but after the way she ran yesterday, she is likely to draw a full field of opponents.”

Lady’s Secret won the Distaff by two and a half lengths, beating seven horses, and with that victory locked up Horse Of The Year & Champion Older Female titles; in an intriguing “Sports of the Times” piece from January 2007, Crist writes about her worthiness for the former title, as well as about a number of other racing issues that feel as relevant today as they did twenty-one years ago. More on this article when we get to Aqueduct…

Lady’s Secret was inducted into the Hall of Fame at the National Museum of Racing in 1992; she was euthanized in 2003 following complications from foaling. She earned more than $3 million in her career, and while not leaving much of a legacy as a broodmare, her hoof prints in the history books are far more significant than any offspring she might have produced.

Today at Belmont, we’ll watch such as notable fillies as Miraculous Miss, Boca Grande, and Tough Tiz’s Sis race; none reaches the stature of Lady’s Secret, a once-in-a-lifetime filly. Here’s her 1985 Ruffian, and below, you’ll find her 1986 Breeders’ Cup win–which of course was run on Saturday, with all the other Breeders’ Cup races. This year, if you want to watch the impressive fillies and mares, you’ll have to do it from work or take the day off…or, you can sign our petition to express your displeasure about the changes in the scheduling and name of this year’s distaff races. Take back the race!

One thought on “Lady’s Secret in the Ruffian”