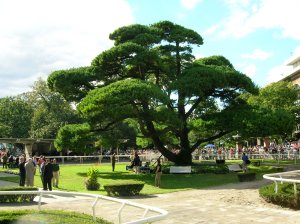 And so our eyes swing eastward, out to Elmont and Big Sandy, as the Belmont Fall Championship Meet opens. They’ll be racing at Belmont beginning today and ending on October 26th, and in between, we’ll see thirty-six stakes races, twenty-three of them graded.

Unfortunately, opening weekend of the Belmont meet is not supposed to be all that different from opening weekend of the Saratoga meet, with a hurricane/tropical storm expected to make its way north over the next twenty-four hours. Most recent forecasts call for “heavy wind and rain,” with gusts up to 60 mph and the heaviest rain expected Saturday afternoon, sure to put a damper on, and possibly a stop to, Saturday’s racing, which features two Grade I races, the Garden City and the Ruffian.

In September, nine of the fifteen graded stakes scheduled are for fillies and mares, and given the strength on the distaff side, we have a lot to look forward to. On Saturday we’ll see Raw Silk, Backseat Rhythm, Pure Clan, Little Belle, Indian Blessing, Stage Luck, Tough Tiz’s Sis, Boca Grande, and Miraculous Miss. Belmont, here I come!

October 18th is New York Showcase Day, with seven state-bred races on the card. In this year of the first Big Apple Triple Crown, won by Tin Cup Chalice after he held off Thatsrightofficer in the Albany last month and entitling him to a $250,000 bonus, this day is a great celebration of New York racing.

I’m looking forward to re-introducing myself to the awesome expanse of Belmont after the cozy intimacy of Saratoga, and to paying $2 for admission instead of $3, at least on Saturday; on Sunday, admission is free. Can we hope that programs, too, will return to their pre-Saratoga prices? It will be a relief, too, to return to the nine-race card.

And I can’t believe I’m admitting this, but I really like the giveaway T-shirt this weekend. Guess that I’d better get there early…

4 thoughts on “Back to Belmont”