Leaving Keeneland Sunday afternoon felt a little like going back to work in mid-August and leaving Saratoga: how can I possibly go when all of that is still going on? Had the racing been mediocre or the weather less pleasant, it might have been easier to leave, but given that in addition to all of the other pleasures of my Lexington vacation, I also got tan, there really didn’t seem to be any reason to leave it all behind…oh, yeah, except that I have to work.

So some retrospective reflections:

The folks at Keeneland apparently take their parking quite seriously…we don’t have parking attendants like this in New York!

Their drinking, too…though I guess that when you sell bourbon at the track for $5.50, it makes sense to think ahead. 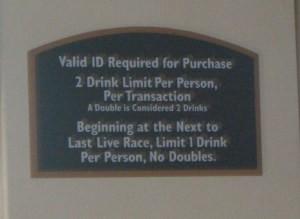 You know you’re in Kentucky when BRIS advertises on the radio; when a top 40 station interrupts its programming to play the feature race live; and when the infield screen shows, in addition to the races, the University of Kentucky football game in its entirety…even during individual races.

Throughout Saturday afternoon, I kept hearing exclamations from the crowd that didn’t make sense to me—did a horse go down? Is there a disruption in the paddock? Did someone get hurt?

Nope. Just a big play in the football game. 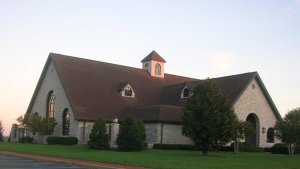 The Keeneland Library is a racing fan’s dream; its materials are non-circulating, but it contains stud books going back to the early nineteenth century, for the U.S. and France and England and Australia and New Zealand; complete archives for the Daily Racing Form, the Morning Telegraph, Spirit of the Times, and the Blood-Horse; incredible photo albums and scrap books that chronicle every single year of Keeneland’s history…the very first race, on October 15th, 1936, the first division of the Top Flight, for a thousand dollar purse, was won by the two-year-old filly Royal Raiment. She ran the six furlongs in 1:12.1, and paid $12. At the bottom of the program page was an ad for Thomas Cromwell Horse Insurance, 150 Barr Street in Lexington.

There’s also art and memorabilia and historical artifacts, such as the shoes that Whirlaway wore in the 1942 Kentucky Derby and Preakness, and the 2002 Eclipse Award that the Library won, in “special recognition of its efforts to preserve the historical records of Thoroughbred racing.” Just being there makes you want to write a book so that you have an excuse to dig through their incredible archives, and to access the wisdom and experience of their terrifically helpful staff.

The track and backstretch are completely open to the public, so fans mill about the barns and the apron, having breakfast, taking photos. Just down the hill from the turn, you can look down and see horses working out on the training track, and up to see them walking back on the main track.

Before the second race, Chris McCarron perched on the rail just to the right of the winner’s circle, behind the starting gate; facing the crowd, he explained to the little girls right in front of him what was happening, and took questions from the crowd about the odds, about pari-mutuel wagering, about the distance of the race. As Robby Albarado, aboard Tizzy, waited to load, he and McCarron exchanged comments about McCarron jockey school graduate Matt Straight, who had impressed Albarado with his win in the first race the day before.

Folks who like to bet but don’t like to handicap can take advantage of two Keeneland characters on the betting machines; Longshot Louie and No Favorites Phil proffer their picks, which customers can bet with one touch on the screen. No word on their ROI…

But speaking of ROI: I am far more of a hunch bettor than a handicapper; rare is the day that I look ahead, budget for races, and handicap in advance. But I did on Saturday, and after losing every single race in my first two visits to Keeneland, I bet seven races and cashed on four, for a tidy triple-digit profit on the day. Like Dana at Green but Game, when I win big at the races (and for me that’s $100 or over), I donate 50% to a racing-related charity. This little bit of profit will go to the Thoroughbred Retirement Foundation.

I have so little confidence in my own handicapping ability that when I study races, bet them, and watch the results, a sense of wonder verging on disbelief suffuses me when the horses I’ve bet actually finish in the order that I’ve picked them. And when it happens on a gorgeous fall afternoon, at a storied and elegant venue, when I’m surrounded by people who love racing; when there are full fields to bet with juicy odds (like the Queen Elizabeth), well, really, who wouldn’t drive twelve hours just to be there?