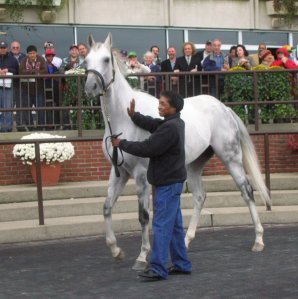 Tomorrow will be too late to enjoy what you can today.
At the Belmont Breeders’ Cup party yesterday, I was given a fortune cookie, assured that it was meant just for me, and this was my fortune. Though not much given to aphorisms or any sort of truth that can be summed up in one pithy sentence, I took my fortune cookie’s advice and enjoyed what Saturday offered, especially the pleasures that existed close to home.

The early part of Saturday was dominated by the retirement party for Evening Attire. (Warning: if you’re not a fan of anthropomorphism, you better stop reading.) Following the first race, he was brought to the paddock and walked around so that fans could take photos; he seemed a little perplexed as he watched the other horses get saddled and head to the track, and the first time that he was walked towards the tunnel, he reared and wheeled, as if to say, “Something is NOT right about this—no saddle? No jockey?” The wind seemed to get to him, too; he was unusually alert, with little of the loping, lazing Evening Attire in evidence. Attuned to his surroundings, he sometimes posed like a pro for photos, he sometimes threw his head, and later on, he didn’t hesitate to let go with a sturdy right foot.

Heading to the winner’s circle from the paddock following the second race, our little parade stopped to allow more photos, and (again, anthropomorphism alert), Evening Attire paused and undeniably looked out at the track. Even though this is where he won the Jockey Club Gold Cup in 2004, even I don’t think that’s what he was thinking about!

Though mostly patient in the winner’s circle, as he was again circled and stopped for the hundreds of photos fans took, he also, at times, had pretty much had it; look at the right foot in a couple of the photos, and folks began to keep a pretty healthy distance from him. As the group was posed for the presentation photo, Evening Attire kicked out and hit the railing behind him with a ping, like a puck bouncing off a goal post—considering what a buzzkill it would have been for him to injure himself at his own party, the group was moved out a little further, into the center of the winner’s circle.

His trainer, Pat Kelly, and his owners, Joe and Mary Grant, were presented with the blanket in their colors, with DVDs containing all of Evening Attire’s wins, and with beautiful albums containing essays from fans and photos from his races. 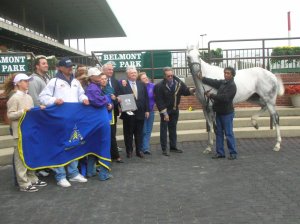 Evening Attire’s been off the track for a month and will shortly be heading north to Akindale Farm in upstate New York, where he will, one hopes, take more kindly to retired life than he did last time. On the way in to the track, I congratulated Mary Grant, who said, “Yeah, I guess so…I kind of thought he’d race until he was fifteen!” 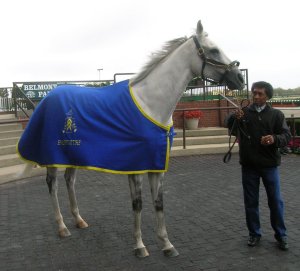 The end of the day was dominated by a visit to the Chief, Allen Jerkens, recovering from heart surgery. I’m not sure that I’ve ever seen Allen Jerkens sitting in a chair; when I think of him, he’s standing in the paddock, or cruising in a golf cart, or sitting on his pony.

Unusual circumstances aside, the Chief was much himself as he ever is: he spoke of the parade of visitors he’s had, expressing how touched and surprised he’s been by how many people have come to see him, and said that he feels pretty good, while acknowledging there’s a ways to go yet. He was visibly pleased when I mentioned how many people had been inquiring about him.

We rather thought that we’d pop in and make a quick visit, so as not to disturb him, but he was eager to chat, and if I’d closed my eyes, we could have easily been on the backstretch at Saratoga. He talked about his current horses and the way they’ve run over the last week, and about his past ones, recalling races and breedings and anecdotes. He’s a huge movie buff, but I learned that he doesn’t like Psycho, and that he’s pretty much rooting for the Rays in the World Series; as he put it, next year the Yankees and the Red Sox and the Blue Jays will probably be pretty good, so this young team had better take its chance while it can. He was planning to watch the game when we left; I guess that he was disappointed when the Phillies won.

He’d watched the Breeders’ Cup races and asked questions about various horses; we flipped through the program to answer his questions, one of which was how Edgar Prado did yesterday (the answer: not too well). He was especially pleased about Richard Migliore’s win aboard Desert Code.

There is, of course, much to say about the Breeders’ Cup, and I’m sure that it’s being said far and wide this day, with varieties of opinions being offered, and maybe over the next couple of days I’ll weigh in. But as is so often the case (and yes, go ahead and accuse me of being provincial—guilty as charged), for me, the pleasures of the racing day lay close to home, in a day bookended by two New York racing legends. Maybe there’s something to those fortune cookies after all…

4 thoughts on “Meanwhile, on the East Coast…”