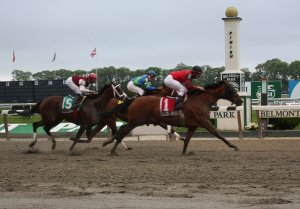 Seattle Smooth—or maybe her jockey Ramon Dominguez—gave her backers and her connections some tense moments during the running of the Grade II Shuvee at Belmont on Saturday. Stuck behind horses down on the rail at the top of the stretch, Dominguez seemed to be waiting for a hole that didn’t open up, and he finally swung off the rail into the four or five path. Clearly much the best, Seattle Smooth steadily gained ground once she found running room, and won by nearly a length.Not quite the way a 1-5 favorite is supposed to do it, but she got the job down. Following the race, trainer Anthony Dutrow indicated that the plan is to get Seattle Smooth a Grade I victory; she’s pointed to the Ogden Phipps Handicap on June 13th.

Photo credit goes to Keith McCalmont of Triple Dead Heat and Down The Stretch, who joined me yesterday on his first visit to Belmont Park. He’ll be posting his impressions on his own site later in the week; we had a great day talking horses and talking racing. We handicapped well and bet badly; met up with Ernie Munick; and watched together Rachel Alexander’s win in the Preakness. I was relieved to see a post from him earlier in the day, as it means that he’s not lost somewhere on the F train, at which I deposited him Saturday evening.

If you haven’t yet read the story that Maryjean Wall wrote about Calvin Borel, get on over to her site and check it out. “Yes, yes,” you’re saying. “Enough about Calvin.” I agree…except that she wrote this when she met him for the first time…when he was 14 years old!

I used Musket Man in exactas on Saturday and for a while there thought that I might cash…not to be, but he may be moving close to “favorite three year old male” status. It’s a little surprising that his third-place finishes in the Derby and Preakness aren’t getting a little more attention, and I’m looking forward to seeing him this summer.

Finally, belated congratulations to Mama and Papa Backstretch, who celebrated their 45th (!) anniversary on Saturday. Their 5/16 wedding date has occasioned many 5-1-6 trifecta box hunch bets from Mama B. (though I don’t recall her ever having cashed one), and they celebrated with dinner at the Wishing Well in Saratoga. I spoke to them shortly before Preakness post time; Papa picked the winner and Mama had the exacta, but neither of them bet it, proof positive that bad betting is a genetic trait.