“There’s nothing quite like watching a true champion win a grand old race at Saratoga,” wrote Steve Crist on Saturday afternoon, perfectly and simply summing up the experience of watching Forever Together in the 71st running of the Diana.

A year ago on the first Saturday of the meet, Spa visitors were treated to one of the best races of the summer, if not the year, when champion Ginger Punch overcame traffic at the top of the stretch to gut out a win in the Go For Wand. She’d won the race year before and was the prohibitive favorite to do it again; Rafael Bejarano kept her on the rail on a muddy racetrack, and in the race call Tom Durkin notes repeatedly that she’s got nowhere to run. Finally squeezing through a tiny hole, Ginger Punch took charge in mid-stretch, and the crowd erupted to see the champion doing what champions do: winning despite difficulty. It may well be my favorite memory of the 2008 Spa meet.

In going for her second consecutive win in a Spa stakes race yesterday, Forever Together offered far fewer anxious moments, but sitting several lengths off the lead (and it seemed that she was so much further back, didn’t it?) throughout a race with little pace, one couldn’t help but wonder whether she’d be able to close over a turf course labeled “good,” especially after she went so wide around the turn.

But doubting proved foolish when this champion went to the middle of the race track and picked up her rivals, finally cruising past Carribean (sic) Sunset to win by a head. Once again, the crowd cheered a champion filly repeating in a Grade I on the first Saturday at Saratoga.

Below: video of Ginger Punch’s wonderful Go For Wand victory from 2008; photos and video of Forever Together’s win yesterday; and a look at Kensei, winner of the Jim Dandy; click on photos for a better view. You can read my recap of the Diana in today’s Saratogian. 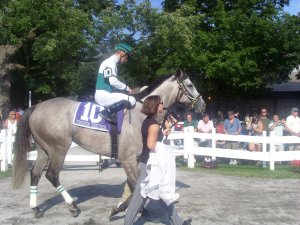 Kensei in the paddock, on the wire, and coming back

3 thoughts on “She does it again”