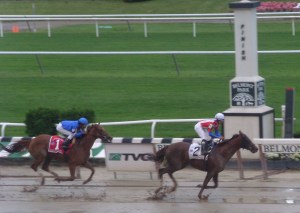 Thirteen days ago, Swift Temper finished thirteen and a half lengths behind Icon Project in the Grade I Personal Ensign at Saratoga. Following that race, trainer Dale Romans said, “She ran good. We’re happy with the way she ran. Of course, we’re disappointed that she didn’t win.”

Thirteen days later, he didn’t need to be disappointed.

Saturday at Belmont, less than two weeks after going a mile and a quarter and finishing second in a Grade I, Swift Temper returned to take on favored Seventh Street in the Grade I Ruffian, a Breeders’ Cup “Win and You’re In” race, at a mile and a sixteenth.

“She came back after the Personal Ensign better than after any other race,” said Romans after his mare’s victory. “She was fresh, training well. She only ran the last quarter of a mile in that race.”

Smiling, he said, “If we’d run our best, we might have gotten beat 8 lengths instead of 13.”

Reminding reporters that Swift Temper’s win in the Delaware Handicap on July 19th, when she beat Icon Project, had already earned the daughter of Giant’s Causeway a spot in the Breeders’ Cup Distaff Ladies’ Classic Filly and Mare Classic, Romans said that he hadn’t determined whether he’d train Swift Temper up to the Breeders’ Cup or race her on a synthetic surface before then.

Of Swift Temper’s poor performance over a synthetic surface earlier in her career, Romans said, “She’s a different horse now, than when she raced on synthetic last time.”

(Interruption: despite repeated attempts to locate the chart/performance information for that race over a synthetic surface, your intrepid researcher came up empty. I don’t know the date of the race, rendering BRIS’s chart archive useless, and the past performance software I’ve used froze every time I tried to get Swift Temper’s lifetime past performances. Man, sometimes this game just slaps you in the face.)

Swift Temper will remain at Belmont for the immediate future.

To honor the filly for whom the race is named and who is buried in the Belmont infield, a horseshoe of flowers is placed annually on Ruffian’s grave (photo from 2007). Racing today, Godolphin’s Seventh Street was trying to become the fourth horse to win both the Go For Wand and the Ruffian, both an admirable and a gruesome double. She finished second.

Ruffian the kitten, who arrives back in Brooklyn on Sunday for a visit, doesn’t love that she’s named for a horse whose life ended far too soon, but she is honored by the comparison and exhibits the speed, energy, and guts of her namesake…at least as much as a 3-pound kitten can do.

3 thoughts on “Swift Temper in the Ruffian”