With snow days at Aqueduct yesterday and today, I turned my attention—briefly—to today’s Gulfstream entries, in anticipation of spending the afternoon in a New York City OTB restaurant, having lunch and watching the races–because really, God forbid that I spend a Saturday away from the races? I rather feel as though I’m fraternizing with the enemy by going to an OTB, but maybe I’ll just eat there and bet through NYRA on my phone. And “bet from my phone” is probably in the Top 10 list of sentences that I thought I would never in my life say, or write.

Anyway: there at Gulfstream in the Grade III The Very One Stakes is Zaskar. You will be forgiven for never having heard of her. 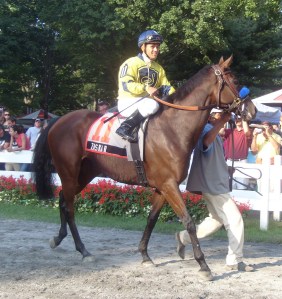 She began her racing career in Europe, racing in England and France five times before coming to the United States in July of 2008. She was well travelled, making starts that summer at Hollywood, Belmont, and Saratoga, and it seems that Zaskar is like the curl with the girl: when she’s good, she’s very good, and when she’s bad, she’s horrid.

A quick look at the charts from her races shows that she finishes near the back of the back (frequently last) or second—a good, competitive, barely beat second. And that’s why I remember her.

Last August at Saratoga, she ran in the Signature Stallion Stakes on the turf at a mile and a half. She went right to the front and led by as many as eight lengths; as the field came to her in the stretch, she was game as anything, getting beaten by the smallest of noses at the wire.

And predictably, she came back a month later in the Grade III Glens Falls and finished last. And a month after that, she was beaten a head in an ungraded stakes at Belmont. And then she was last in the Grade III Cardinal Handicap at Churchill. So if she’s true to her form cycle, we can expect a very game second from her later today in Florida. If I were a hunch betting woman, my bets would include Zaskar, Kiawah Cat, and Lady Shakespeare. If, of course, I were a hunch betting woman.

And for a little levity on this wintry, no-racing-in-New-York day, I offer the following, passed on to me by one of my students. Is it good or bad that, after class, a student said to me, “Hey, Ms. Genaro! I have a good horse racing joke for you”?

One thought on “Looking south on a snowy day”