Not for the first time, the British invaded New York Saturday afternoon. But this time, they emerged the victors.

Awesome Act was awesome indeed. His trainer believed he could do it, and so did the betting public who made Awesome Act the 5/2 favorite in yesterday’s Gotham Stakes. The faith—and investment—of both parties was rewarded when the three-year-old son of Awesome Again decisively won by a length and a quarter.

The three-year-old chestnut colt brought with him many questions to Ozone Park when he arrived here from England last week: Could he win a stakes race in his first race since last November? How would he take to the dirt? How would the transatlantic journey affect him?

Following the race, trainer Jeremy Noseda couldn’t have been more pleased with how his colt answered those questions. “I believed if he travelled well and he handled the dirt, then we’re in business. I’m happy with how he took the journey; he’s been bright and well. I always felt that a horse by Awesome Again—I felt pretty comfortable he’d handle the dirt. So we got the first hurdle out of the way, now he’s in America, now we move forward from here.”

Awesome Act raced towards the back of the pack around the clubhouse turn, moving as the field turned into the backstretch. Wow Wow Wow set testing fractions of 22.85 and 46.60, and as the field came around the final turn, jockey Julien Leparoux, racing four wide, looked over his shoulder and said “Go!” to Awesome Act, who responded willingly, spurting off at the quarter pole. Yawanna Twist closed willingly to be second, and Nacho Friend, coming in off an eight-month layoff, ran well to be third. Awesome Act himself hadn’t raced since the Breeders’ Cup, when he was beaten a length and a half to be fourth in the Breeders’ Cup Turf Juvenile.

“[Awesome Act’s] performance was all we could ask for from a first effort on the dirt and first start back since early November,” said Noseda. “It was a good solid race. There were no graded stakes winners in there, and we’ve still got to go a long way, but the first hurdle out of the way.” 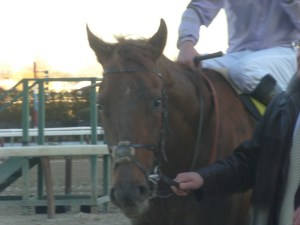 Noseda noted that his horse had grown up a lot over the winter. “The pleasing thing for me is that he lugged out badly when he ran in the Breeders’ Cup, and he raced more professionally today. The work we did over the winter straightened that out. I felt that with a strongly run race and him being more professional, I thought he might have won the Breeders’ Cup Turf Juvenile.”

Little of the famed British understatement was in evidence as Noseda talked with obvious confidence in his horse. “Looking at pure form, he was the horse who had run in the best possible race. He had the best line of form of any horse in the race, so it was no surprise to me that they made him favorite. But that doesn’t matter–only the result does.”

Awesome Act will stay at Belmont and train up to the Wood Memorial in the care of Noseda’s assistants, as Noseda returns to his base at Newmarket to train his string there and prepare to run two horses in Dubai later this month.

The conversation about whether Awesome Act might be a Derby horse began last fall, “on the day after the Breeders’ Cup,” according to Noseda. “There was a time that he might come here to be trained. Selfishly, I felt that he was possible legitimate horse and I stood up and said I believe I can do it from Europe.”

Noseda’s been right about an awful lot so far: the training in Europe, his horse’s ability to handle travel, and Awesome Act’s talent on dirt. Awesome Act will undoubtedly face tougher competition at Aqueduct on April 3rd in the Grade I Wood Memorial. But yesterday, Noseda wasn’t thinking about that.

“The dream lives on,” he said, “and we’ll live the dream for the moment.”

(Hmmm…maybe I found my Derby horse?)