Super Saver in the saddling area

We’d waited two weeks to see what would happen next.  We wondered whether, after waiting so long for his first Kentucky Derby win, Todd Pletcher would find himself in the enviable position of bringing a Triple Crown candidate to his home track.  We sat through seven and a half hours and 11 races…and then it was over.

Super Saver, after following First Dude around much of the racetrack, “folded up pretty good,” in the words of his jockey—the same jockey who, not long ago, declared that he’d win the Triple Crown.  Oh, well.  Guess he didn’t learn much from the Belmont/Mine That Bird guarantee a year ago.

First Dude, who really earned his name on Saturday afternoon, led 11 horses on a merry chase around the Pimlico oval.  Taking notes for a race recap for the Saratogian, I jotted down the order of the field and the fractions, and when I sat to write, I figured I must have gotten it wrong.  First Dude really went that fast, and really lost by only three-quarters of a length?

First run past the grandstand: Super Saver #8 (inside), First Dude #11 (outside)

Run to the wire: Lookin at Lucky #7 (outside), First Dude (inside)

Lookin at Lucky’s victory offered much in the way of storylines:  there was the jockey change, and Bob Baffert’s return to the winner’s circle of a Triple Crown race, and, of course, the death of yet another Triple Crown dream.

But after the race and Sunday morning, an awful lot of people were talking about the horse that finished second.

At the Stakes Barn Saturday evening, Dale Romans sat outside Paddy O’Prado’s stall and watched as First Dude walked outside.  “He’s so big,” he said, with obvious delight in his horse’s finish.  He–Romans, not the horse–was wearing we called in my college days a perma-grin.

Romans was talking to NYRA handicapper Andy Serling, who was pretty happy himself, having given out the $188.60 exacta on his Belmont Stakes blog a few days earlier.

And amid the news that the winners of the Kentucky Derby and the Preakness would not be gracing beautiful Belmont Park with their presence, racing fans basking in the Preakness afterglow were happy to hear that both Romans and First Dude would be taking a shot.

The racing day was picture-perfect:   devoid of deadening mid-Atlantic humidity, sunny, warm but not hot.  I still don’t understand the thousands of people who trek to the infield of a racetrack and never get a look at a horse…but they seemed to be having a good enough time, and as I strolled around a couple of times, I was heartened to see some people—though not many, holding Daily Racing Forms and in line to bet.

A day that starts so early and end so late feels like it should have some heft, but now it feels ephemeral.  Lookin at Lucky’s going back to California, and it will be a while before we see him again; his win will feel significant only if he goes on to racing glory later this year.  For most of the country, racing season is effectively over.

If you waited all day to watch the Preakness because you wanted to see Super Saver win, you went home disappointed.  You didn’t get your Triple Crown contender.

But you did get a thrilling horse race on a gorgeous day at a packed track; you got a stretch duel among three horses that literally went down to the wire; you got a runner-up with a memorable name and a trainer who hasn’t forgotten that this game is supposed to be fun.

Super Saver, we hardly knew ye.  Lookin at Lucky, safe travels back to California.  First Dude:  see you at Belmont. 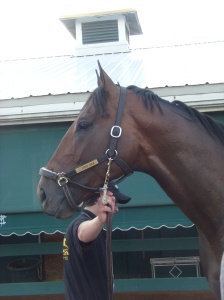 First Dude after the Preakness

3 thoughts on “The Dude”