It starts on Saturday morning, with a trip to Barn 1 to check on First Dude, Quiet Temper, and Stately Victor.  Stately Victor had gone out early and was home in his stall by mid-morning; First Dude and Quiet Temper went out for scheduled works, with Tammy Fox aboard both of them; Uptowncharlybrown and Trappe Shot also put in appearances

On the far left, Uptowncharlybrown; on the far right, First Dude

Uptowncharlybrown (inside) and Trappe Shot 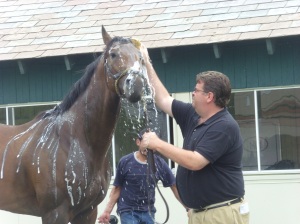 Quiet Temper getting a bath 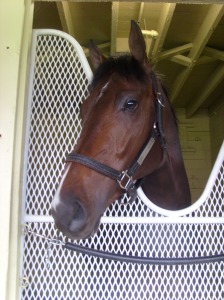 After a morning on the backstretch, it’s Saturday at the races.  The cat horses threw in some rather ignominous performances…but the Chief got a victory in the second with Close Range…

…and Hour Glass was impressive in winning the Vagrancy: 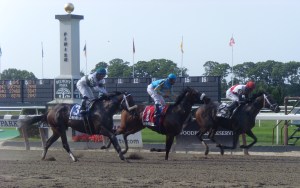 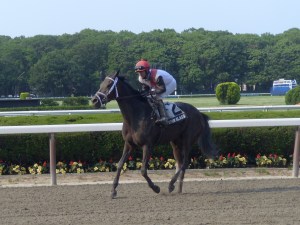 You gotta get there early to see Stately Victor… 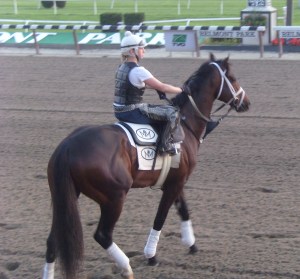 Stately Victor gets a bath

And Sunday at Belmont ends, as it began early….gone by 6:15 am, no racing for me…but Monday is another story… 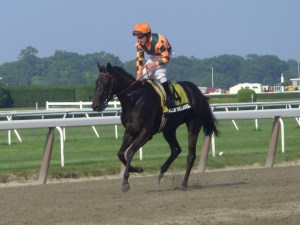 Check the Label coming back after winning the Sands Point

…whose owner, Brereton Jones, affectionately pets her in the winner’s circle. 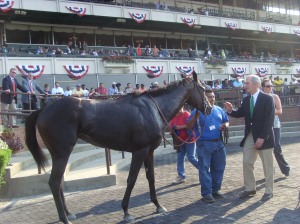 And now, the it’s paddock time for the Main Event….

…and here’s the Handicap hardware:

And while it’s undoubtedly high-class stuff, there was only one type of Quality that mattered: 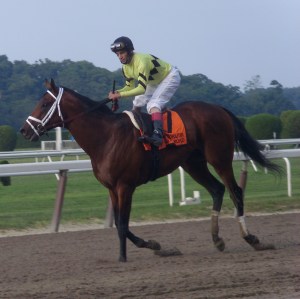 In a masterful, breathtaking, gutsy performance, Quality Road brought the Belmont crowd to its feet, elicited cheers as he came back to the winner’s circle, and gave his trainer Todd Pletcher another first:  a victory in the Met Mile.

And only one thing might have made the weekend more perfect–hitting that double-carryover Pick 6, in which, after losing the first race by a head (oh, how we had hope for that inquiry), the little group to which I was invited to contribute nailed the final five races.  Sigh.  You can’t, I guess, have everything…but I will take, eagerly, enthusiastically, and gratefully, with both hands, what this Memorial Day weekend offered.