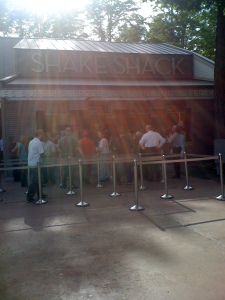 ﻿﻿Members of the media (I can barely write that with a straight face) were invited yesterday to a preview of the two new culinary splashes at the track this year, Danny Meyer’s Blue Smoke and Shake Shack.

Both have been firmly entrenched on the New York gastronomical landscape for several years, and when Citi Field opened last year, Blue Smoke and Shake Shack at the stadium gave patrons a reason to venture to Flushing Meadows, even when the team didn’t.

Until yesterday, though, I had never partaken of the pleasures of either restaurant.  Waiting may indeed be “part of the experience,” but standing in line for an hour to get a hamburger is never going to be a part of this particular New Yorker’s experience—not if she can help it, anyway.

So it was with much delight that yesterday afternoon I walked up to an empty counter and had my first Shake Shack burger.  I passed on the various milkshake options (all of which garnered rave reviews from those more intrepid than I), but can enthusiastically recommend the single Shack Burger ($4.75), which was manageably sized and oozing with ShackSauce (no idea what’s in it, and probably happier that way).

The pulled pork from Blue Smoke got a thumbs-up from those tried it; I sampled the chipotle chicken wings, and while I think I prefer good old-fashioned buffalo wings, these were generously sauced with a little bite to them—tasty indeed.  But if yesterday’s form holds, we’re going to have an awful lot of sticky betting machines, between the gooey wings and the dripping ShackSauce.

Restaurateur Danny Meyer was on hand to welcome guests and answer questions, and it turns out that he’s no Saratoga rookie.

“My father and grandfather used to come up here for the whole month when the meet was four weeks,” he said.  “We’d stay in the Grand Union Motel and come to the track every day. I’ve been coming since I was 16 and I love it here.”

Despite opening two stands and training a significant number of staff to be ready for opening day, he was able to enjoy being at the track, even without the races.

“I’ve gotten chills twice so far,” he said.  “Once, when I pulled up near the clubhouse and saw the place.  And second, being here, on the track, and training people to work here.”

Meyer’s passion for both food and the track were in evidence yesterday, and he’ll be on hand today to oversee the official openings of his new spots.  Traditionalists may well be taken aback by the modern and rather anachronistic architecture of the new spots, but given that they offer good food, reasonably priced, with a view of the horses in the paddock, it’s a good bet that we’ll be joining our downstate friends, on line, enjoying “the experience.”