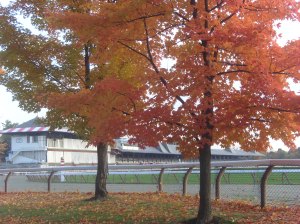 My autumn tracks are Belmont and Keeneland, both of which are beautiful in the fall.  Both tracks race in the spring, too, but they seem somehow made for colorful foliage, for chilly temperatures, for bridging the transition from tank tops to sweaters.

Saratoga is all about the summer, but it, too, is resplendent in the fall.  Autumn comes beautifully to this town that sits between the Catskill and Adirondack Mountains, and the track’s summer charms – the park-like atmosphere, the tree-filled backyard and backstretch – transfer their effulgent glories to the fall.

The drive up the Taconic this weekend was distractingly eye-catching, patches of burgundy and ginger and gold appearing around each turn and over each rise. Saratoga is wearing its colors proudly, and nowhere are those colors more on display than at the Oklahoma and at the main track.

The Oklahoma was busy on Sunday morning; set after set of Zito runners, including his Classic-bound Pennsylvania Derby winner, Morning Line, made their way to the Oklahoma, as did horses from the barns of Todd Pletcher, George Weaver, Chad Brown, Christophe Clement.  Temperatures began below freezing but warmed as the sun rose higher, leading both visitors and riders to shed layers.

I wandered from the Oklahoma to the main track, around the turns, across the grounds, and up to the roof. Click on photos to enlarge. 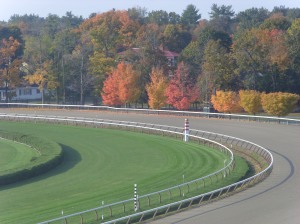 I love the stacked picnic tables... 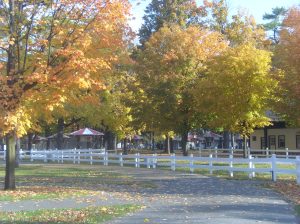 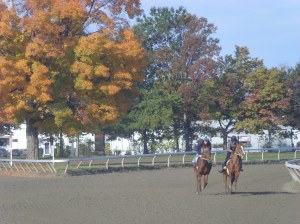 At the main track, I saw a security guard standing where Hattie’s is during the meet. I introduced myself; he smiled and welcomed me genially.  “Usually,” he said, “I’m the only one here.” And indeed, the grounds and the clubhouse were deserted.

Later, on my way out, I wandered through the press box, and I passed this: 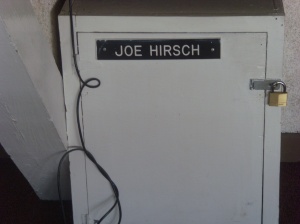 Surely I’ve walked past it hundreds of times, but I’d never really noticed it. I wondered what it contained and wished that some other Saratoga-homesick turf writer were around for me to ask. But none was, and in the absolute stillness and absolute solitude of an October morning, the ghosts of horses and writers past seemed absolutely present, re-claiming Saratoga all for themselves in the quietness, until the crowds descend again next summer, as they have for over a century.