Ah, library day. After a few days of shopping for Christmas, visiting farms, and seeing friends, Tuesday was the day set aside for spoiling myself at the Keeneland Library, for delving into racing’s past, for exploring the Library’s precious collections, for reading and writing and taking notes.

After calling on the unparalleled knowledge of librarian Cathy Schenk, I happily settled down with piles of books and duplicated articles, and whiled away several hours in the19th century. 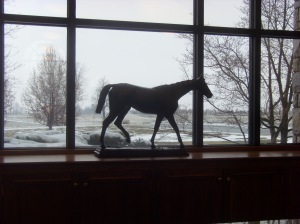 I spent a good deal of time yesterday in the company of Samuel C. Hildreth, the owner/breeder/trainer who lived from 1866 – 1929; in my research about him for an article for the Saratogian last summer, I came across his The Spell of the Turf, written in 1926 with James R. Crowell. It’s easily available in a number of libraries, all, alas, non-circulating, and so I settled myself in a favorite chair at a favorite table with a favorite view, and off I went, journeying back with Hildreth as he told the story of his racing life, which began, apparently, about as soon as he could walk; he acquired his first horse at the age at which most of us are in kindergarten.

Last June, I met the Library’s director, Becky Ryder, who gave me a tour of the facility with an emphasis on the Daily Racing Form preservation project (another Saratogian article last summer); though the Library has made significant progress in digitizing its massive collection of Forms, it’s got a long way to go, and Ryder estimates that it will take about $10 million to complete the project.  That’s about $1 per page.

Still…surely there’s some way to rally the racing community to support this important project, some way to fund the preservation of more than a hundred years of racing history.  And in this time of Christmas miracles, a racing fan can surely be forgiven to allow visions of a few sugarplums to dance in her head.

I at first thought about the racetracks, those beleaguered institutions that always seem to be wondering about how to increase their revenue. How many tracks are there in the country? Suppose each donated…$5,000?  $10,000?  $50,000?  Or some amount pro-rated as a percentage of its handle?

Or…what about fans? Suppose on a designated day each year…each month?…collection baskets were set up at racetracks, with each customer asked to donate a $1 that would go to the Library for this project. On an average Saturday, how much would that bring in each year?

And maybe that could be extended…maybe those other organizations could also be served by such a voluntary, collection basket approach – suppose each track set aside one Saturday a month to collect for a given organization?  How much money could be raised, $1 at a time?

$1 a person. $1 at a time. $1 a page. These are the sugar plums dancing in my head on a winter morning in Kentucky; flights of fancy are permitted at this time of year, and so, Santa, if you’re listening, maybe you could consider nipping over to the Keeneland Library and popping down its chimney to leave a gift or two?

3 thoughts on “The Keeneland Library, the Daily Racing Form, and Santa Claus”