Saturday was closing day at Aqueduct, and by the time that last race is run, most people who have spent the winter in Ozone Park are unashamedly declaring their enthusiasm to get back to Belmont.  The grittiness of Aqueduct, the lack of aesthetically pleasing outdoor space, the long weeks of (charitably) mediocre racing have taken their toll, and Belmont beckons with it s promise of spring, verdure, and good horses.

But this year, even the most hardened felt a little wistfulness as they bid farewell to the Big A. “Take a good look,” I heard more than once. “It’s going to look a lot different when we get back here in the fall.”

If all goes according to plan, Aqueduct, as we know it will, without fanfare, notice, or a proper eulogy, disappear this summer, replaced by the latest incarnation of itself, not for the first time. In the 1950’s, Aqueduct – first opened in 1894 – was completely renovated, a process that garnered hundreds of column inches from the middle of the decade to the grand re-opening in 1959.

In honor, then, of Aqueduct, a look back:

Aqueduct has been chosen as the locale for this city’s “bright new world” of thoroughbred racing, it was announced yesterday by the Greater New York Association, Inc. The association promotes racing in this state on a non-profit basis, under the supervision of the racing commission.

Among the modern features will be escalators, air-conditioned restaurants and easy access to parking areas and public transportation.

The new racing oval will be a mile-and-an-eighth strip, with a turf course inside and figure 8 jumping course in the infield.

…the amazing thing about the Aqueduct opening [in 1894] was that it rated only three lines in The New York Times…Aqueduct got the brush-off treatment…and the next day was even worse.

The NY tracks have long been relics [and] look frayed, woebegone and down-at-the-heels…Desperate situations call for desperate antidotes.

Despite all the controversy and debate in the inner councils as to whether Belmont or Aqueduct would become the supertrack, there really wasn’t any alternative. The complete rebuilding of the oval near the Idlewild airport was so logical a solution that the actual announcement must be regarded as not much more than a formality.

Then the long-suffering NY horse players will learn how the rest of the world has been living. They’ll be catered to at long last.

The horse players won’t get any richer but at least they’ll be able to mosey along to the poorhouse in a luxury and comfort that so far have been denied to them. 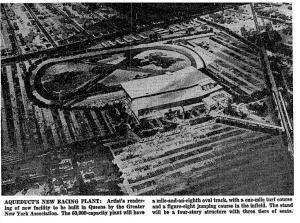 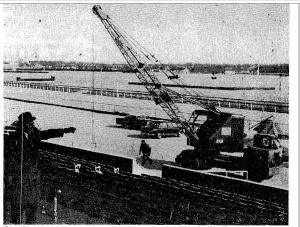 The apron at Belmont, which underwent renovation at the same time Aqueduct did

Blueprints and bulldozers combined yesterday to push Old Belmont Park’s historic landmarks into oblivion in the name of progress.

The 175-year-old Manice Mansion where Louis Philippe I, King of France, spent part of his exile is being steel-balled into rubble. The baroque dwelling acquired by Belmont Park in 1904 was the original home of the Turf and Field Club, organized in 1895.

Near-by Aqueduct meantime was being prepared for the start of its $25,000,000 rebuilding program next week. By the spring meeting of 1959 the Greater New York Association, which conducts flat-racing meets in this state, expects Aqueduct to be the finest track in the East.

At its 1905 opening [Belmont] was hailed as the last word in modern racetracks. Grandstand admission was $2 for men, $1 for women.

[We interrupt this trip down memory lane to offer the apron at Aqueduct, last Saturday] 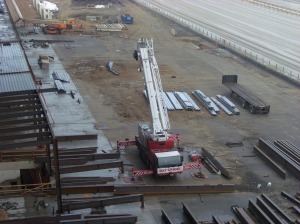 Grave concern is being expressed in horse-racing circles these days for the serious racetrack fan. He is close on the heels of the vanishing Indian in the race to obscurity, and may even win in a photo finish.

The reason: luxury. The racetracker is being pampered and spoiled at every turn, not to mention at the eighth pole and the stretch.

Aqueduct is expected to re-open next season in a splendiferous setting. Even the classic elegance of staid Belmont has bowed to the trend with the installation of escalators.

So grand were the early descriptions of the project that it acquired the appellation “dream track,” a term used almost universally in any conversational reference to Aqueduct.

Several weeks before the announcer at the Aqueduct Race track sounds the familiar “the horses are on the track,” a $500,000 advertising and promotion program will have started.

The theme [of the campaign] will involve the use of a “Big A.”

This stands for Aqueduct. It also relates to the nickname for New York City thoroughbred racing, referred to by improvers of the breed as the “Big Apple.” This is meant to signify big-time racing, as opposed to racing in smaller cities.

The new Aqueduct is planned for a useful life of 50 years.

They certainly got that one right, didn’t they?

More to follow in the fall, as we await the opening of this version of the “dream track”…