What a month for the Belmont Child Care Association! Like most racing organizations, it takes advantage of big racing events (in our case, the Belmont Stakes), but from start to finish, June has been a banner month at Anna House.

It started with the ribbon cutting for the two new classrooms at Anna House, on the night before the Belmont. The two rooms will enable the BCCA to help more children of the backstretch and to institute an after-school and tutoring program for older children. The two rooms were made possible by the generous donations of BCCA board chairman Michael Dubb and the many contractors who contributed time and materials. 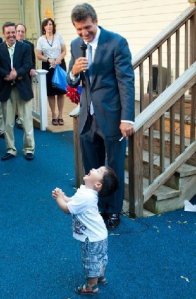 Michael Dubb and Sebastian, a student at Anna House

On June 10, the Lemon Drop Kid playground was packed with the BCCA’s many supporters, including Graham Motion; Kiaran and Letty McLaughlin; David and Fay Donk (Fay is president of the BCCA board); John Velazquez and Javier Castellano. Approximately $12,000 was raised by attendees purchasing items off the Anna House wish list.

Earlier this week, the Consul General of Mexico, Carlos Sada, and his wife Maria Elena, came to Belmont to visit the backstretch workers and the children. Consul-General Sada was at Belmont earlier this month to assist backstretch workers with visa issues; on Wednesday, he talked to workers in nearby barns and visited with the children. He was joined by BCCA board member and Thoroughbred owner Herb Oster and trainer Ramón (Mike) Hernandez.Consul-General Sada grew up around horses, riding and showing them from an early age; Hernandez was so impressed with Consul-General Sada’s way with the horses in the barn that he offered him a job if this diplomat thing doesn’t work out.

Consul General Sada and his wife will attend the BCCA fundraiser in Saratoga on August 24 and would like to return to the Belmont in the fall to meet with the Mexican nationals on the backstretch to get a better understanding of their needs and to determine how the Consulate can be of assistance to them. 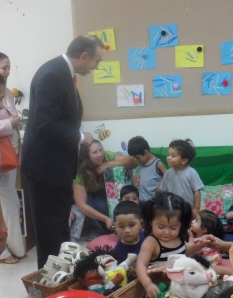 Today, Jeremy Edge concludes his walk from Belmont Park to Saratoga Race Course to raise money for the BCCA and for the Permanently Disabled Jockeys’ Fund. His efforts have raised thousands of dollars for the children, including a $1,000 donation from the New York Thoroughbred Horsemen’s Association.  He’s weathered storms and sunburn while logging nearly 200 miles on foot. Many, many thanks to him and his efforts on our behalf.

Finally:  When Chip Woolley came to Belmont with Mine That Bird two years ago, he became a frequent visitor to Anna House.  He told the BCCA’s Stuart Chenkin, “Visiting Anna House was the most fun I had since coming East, except for winning the Derby,” and we were glad to learn that he hasn’t forgotten about us.

In April, Sunland Park, Woolley’s home base, sold Chip Woolley bobblehead dolls that the trainer would sign for a $5 donation. The occasion raised more than $2,700, and Donna Chenkin, executive director of the BCCA, recently learned that Woolley designed Anna House as one of the charities to receive the donation.

Thanks to everyone who has supported the children of the backstretch, this month and every month.  Visiting Anna House is unmitigated joy: the space is beautiful, educational, warm, and nurturing, the children engaged, happy, curious.  If you’re ever at Belmont between 5 a.m. and noon, do make arrangements to visit.  The children love visitors, and you’ll be glad that you stopped by.

3 thoughts on “Busy Times at the Belmont Child Care Association”