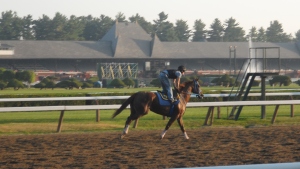 Kudos to everyone who pulled off opening day of racing at Saratoga yesterday. Despite widespread concerns about the heat, all the horses and humans came home safely, and handle and attendance were up significantly over last year’s rainy opener.

Post parades were shortened to allow horses extra time in the shade in the paddock, and extra hoses were on hand to spray horses with cool water.  NYRA’s racing secretary, P.J. Campo, was reportedly out on the track after races, helping to give horses a shot of cool water before they headed back to the barn. My favorite moment of the day might have come after the Schuylerville, when I was the lucky recipient of collateral cool water intended for a filly.

Most of the people that I talked to were unsurprised and unconcerned about the decision to race; horsemen, visitors, and writers noted Texas, Florida, and Kentucky run all summer long and “not that bad” was the phrase most often used to describe yesterday’s conditions.

Tom Bush got the first winner of the meet with Boat, a half-brother to Banrock out of Mizzen Mast; Phil Serpe took an early lead in the “biggest longshot” race when Pure Gossip came home at $76.  A parade of longshots combined with the day’s handle (NYRA surely benefitted from so many other track’s having cancelled), resulted in a juicy Pick 6 carryover of $67,938.

The new toteboard, offering clarity previously only dreamed of at Saratoga, still has a few glitches, but the quality of the video during the race and replay is a welcome addition. 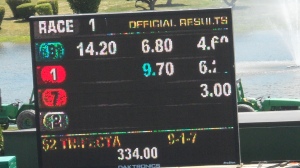 This place is new, too, but as of 7:30 Friday morning, I have no idea what it is. Must remember to go back and check during the races.

Early on Friday, the newly reconfigured Jim Dandy bar on the ground floor of the clubhouse was still being whipped into shape; the Cheerios/draft beer breakfast of champions was not, alas, on offer.

Georgie’s Angel took the first stakes race of the meet, winning the Grade 3 Schuylerville by a length and a half. Trainer Todd Pletcher indicated yesterday that the Grade 1 Spinaway on September 4 will be next. 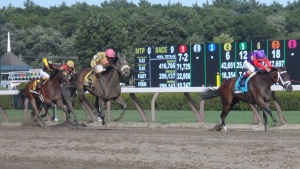 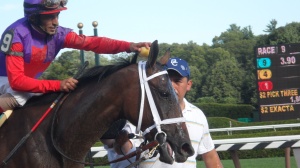