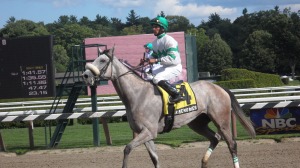 Darby Dan Farm began life in Kentucky in 1949. Following the death of E.R. Bradley in 1946, his Idle Hour Farm, on Old Frankfort Pike in Lexington, was sold, and John Galbreath, who had begun Darby Dan Farm in Ohio, bought a portion of the property.

Winter Memories doesn’t race in the name or the colors of Darby Dan; she runs in the green and white silks of Phillips Racing Stable, the racing partnership of John Phillips, Galbreath’s grandson.  Phillips also bred her.

But when Phillips talks about his wonderful filly, it is the spirit of Darby Dan that he evokes.

“We are very blessed to have this horse,” he said after Winter Memories’ exhilarating win in the Grade 3 Lake George yesterday. “She is the fifth generation in our family, and that makes it very, very special.”

“I would rather breed a horse any day and have it win than simply buy a horse,” continued Phillips. “It’s the continuity of generations, both equine and human. Today my grandfather was watching, my uncle was watching, my mother and my dad were watching. That’s what makes it special. To have my sisters here, who are part of the partnership…that’s what it’s about.”

Winter Memories’ trainer, Jimmy Toner expressed similar sentiments. He trained Memories of Silver for the Phillips family; he trained her to a win in the very first edition of the Lake George in 1996.

“I was watching the rerun of her mother winning this race,” said Toner, “and that was one of the most daring performances by a horse. Jerry Bailey literally put her nose in between two horses and she split the horses, she made them split and she went on and won.

“They’re two totally different horses, but to see the daughter do it and the mother do it…” His voice trailed off.

“We have to give a lot of credit to Jimmy,” said Phillips. “He not only trained her, but he trained her dam, and that really makes it fun for me and the rest of the family.”

Toner has long said that Winter Memories is a lot different from her mother, and not only because one is bay and one is gray.  According to him, they don’t resemble each other temperamentally, either. But the filly’s memory-making performance yesterday spurred Phillips to comparisons.

Coming around the final turn, jockey José Lezcano was forced to check Winter Memories to avoid clipping heels with Calmafterthestorm. She lost all momentum, yet when Lezcano took the filly to the outside and clear running room, she exploded down the stretch.

“That wasn’t a check, that was a stop,” said Phillips. “I was so nervous I put my glasses down. I thought the race was over.

“In that respect, she reminded me of her mother, because her mother was very quick on her feet, very athletic. That was very reminiscent of her mother.”

Neither Toner nor Phillips expressed satisfaction in beating More Than Real, the only filly who’s beaten Winter Memories.

Phillips recalled, “We had a horse years ago called Wonder Again, who ran against Riskaverse eight times. It was always exciting, and we got to be friends with the trainer and owners of Riskaverse, and that got to be a really fun thing.

“So More Than Real won the Breeders’ Cup and today we turned the tables. We’re going to see each other again, and that’s great for the sport.  We had our day today, Bobby Flay [owner of More Than Real] had his day.  I’ll look forward to it.”

Earlier this year, Toner and Phillips had mapped out a path to the Queen Elizabeth II Challenge Cup at Keeneland. That path included the Lake George and leads next to the Lake Placid at Saratoga on August 21.

Said Toner, “Her mother won the Queen Elizabeth, and we’re hoping to do the same thing.” 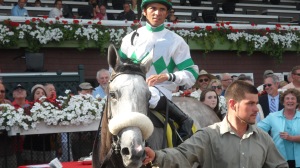 For more on Winter Memories and her human and equine family, check out this post from last fall. And a HUGE thank you to the folks at NYRA for making Memories of Silver’s race available so quickly.  Check out and subscribe to their channel on YouTube.