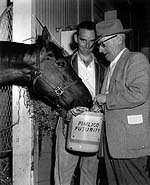 No one – jockey, trainer, owner – won Saratoga’s signature race more often than he did, teaming up with owner George Widener, Jr., for a record five Travers Stakes. Two owners matched Widener’s total, but in the trainer standings, Mulholland is alone on the lead.

He was born in 1883 in Lexington, Kentucky, and his association with Widener began when he got a job with Jackson Joyner, Widener’s trainer. Mulholland succeeded Joyner in that position, working for Widener for 45 years.

Mulholland won his first Travers for Widener in 1939 with Eight Thirty and his last with Crewman in 1963.  Like Elliott Burch and William Booth, he won the race in three separate decades.

That 1939 Travers brought together several colts with an eye on championship honors, leading writer Bryan Field to write something similar to words we’ve likely read this week:

The Travers was supposed to throw more light on the tangled 3-year-old situation, which has Johnstown, Challedon and Eight Thirty as candidates for top honors, just about in that order.”

Said Samuel Riddle, “There are several nice colts, but they are beating each other and it’s had to decide.”

The three-year-old title that year ended up going to Challedon, who didn’t even run in the Travers that year.

Mulholland had to wait 11 years until his next Travers, but when he did get back to the winner’s circle for the Midsummer Derby, he did it with a son of his first Travers winner. Lights Up was by Eight Thirty, and he beat favored filly Bed o’ Roses in the fastest time since Man o’War in 1920.  Mulholland and Widener also won the Saratoga Special that day with Battlefield, prompting James Roach to write,

George D. Widener, chairman of the Jockey Club and boss of Belmont Park, today had an afternoon at the Saratoga race track that he’ll never forget.

A year later, Widener was almost certainly recalling that August day, when his Battlefield returned to the Spa to give the Widener/Mulholland team its second consecutive Travers Stakes victory.

Mulholland’s 1962 Travers win is his most well-known, his Jaipur’s memorable stretch duel with Ridan etching itself into Travers history.

The Times’ Joe Nichols called it “one of the most exciting races imaginable,” noting that the winner was “partial to Saratoga, where he won the Flash and the Hopeful last year.”

Mulholland got his final Travers win the following year, in 1963, with Crewman. In the year of the track’s centenary, the biggest crowd ever to that point at the Old Spa, 29,335, was on hand to see Crewman’s victory and was “almost completely unprepared for the outcome” as Crewman beat three of the nation’s top horses in Chateaugay, Candy Spots, and Never Bend.  A win ticket on Crewman paid $41.90 to those who, according to Nichols, “had the temerity, or sagacity, to bet him.” And Crewman’s victory might have made more than just his backers happy:

Crewman’s victory saved the work-crew here one job. It is the local custom to paint the canoe in the infield lake at Saratoga in the colors carried by the winning horse in the Travers. Widener’s light and dark blue remain undisturbed on the little craft.

Four years after this Travers win, Mulholland was out of racing and in the Hall of Fame. He suffered a heart attack in 1967 that would prevent his return to the races, and the man that had given him so many good horses during his career no doubt helped to give him something more permanent at the end of it.

Widener served as president of the National Museum of Racing and Hall of Fame from 1960 to 1968, and in 1967, Mulholland was voted into the Hall of Fame even though no trainers’ names were on the ballot that year.

“From time to time,” Clark said, “we are going to name deserving veterans. There were no trainers submitted to the nation-wide voting committee this year, but there was unanimous agreement on the part of the trustees to install Bert Mulhollands (sic).”

Mulholland would almost certainly have gotten into the Hall of Fame through traditional means, but his induction in 1967 meant that he was alive to see it. He died the following year.

[Mulholland] gave the first impression of being hard to talk to. However, once the reserve was broken, he became quite convivial, especially over a glass of champagne celebrating a stakes victory. He liked to start the day with a bit of bourbon in his coffee.

This Travers week, I imagine what it might have been like to walk the backstretch, talking to Mulholland about a Travers starter.  And maybe, sharing a cup of coffee.

Photos are reprinted with permission of the National Museum of Racing and Hall of Fame. Please don’t re-post them without permission.