Among the trio of Grade 1 races on Saturday at Belmont is the Jamaica, named for Jamaica, Queens, for 56 years the home of Jamaica Racetrack.

Opened in 1903, Jamaica was the odd track out in 1959, when management of racing here consolidated under the New York Racing Association, first known as the Greater New York Association.  The Association ran four tracks: Belmont, Aqueduct, Jamaica, and Saratoga. Jamaica was deemed the expendable one, and it was razed to become a housing development.

The first races were run at Jamaica on April 27, 1903; the Excelsior was the feature on the one-mile track, which was opened without much fanfare and the usual extravagant praise in the racing press.  Rather quickly, though, questions were raised about the new track’s surface:

The official time announced for races run on the new Jamaica race course yesterday caused horsemen to open their eyes in astonishment. When the smart three-year-old Plater finished six furlongs in a gallop, an easy winner of the Columbus Stakes, in 1:12 4-5, or within a fraction of a second of the world record on a circular track, there was some speculation as to whether the new course might not be a trifle short, or the watches of the timers a little slow, for it seemed next to impossible for even so good a horse as Plater to run so fast over a track that was deep in dust and so soft that it gave way under the hoofs of the horses, letting them go through the top soil without affording good foothold. 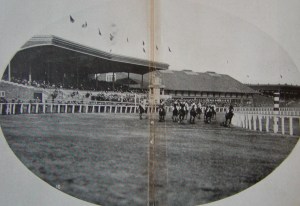 One person who might have been able to answer questions about the track’s surface and how it was playing was trainer and clocker Eddie Hodgson, the man who, according to a 1959 article in the New York Times called “Final Racing Card at Jamaica…”, was present at both the opening and closing of the old track:

Eddie Hodgson, a former trainer and now a clocker, is one of the few around who was at Jamaica when it opened.

Dapper as ever, he was there in a reminiscent mood yesterday.

“This place has been like home to me,” he said. “Losing it is like losing a real good pal. We used to walk horses here from Sheepshead Bay and Gravesend tracks, run ‘em in the afternoon and walk them back at night.”

If it’s true that Hodgson was there when Jamaica opened, he worked on New York race tracks for more than 60 years. In 1963, Steve Cady profiled him for the Times; Hodgson was 79 then, and still clocking horses at Aqueduct.  (And he was apparently rather a versatile guy, appearing that year on “What’s My Line” and giving the panel a “sound thrashing.”)

To the great majority of local racegoers, it’s pretty sad, too, because Jamaica has spawned more $2 horse players than the famed Blue Grass region of Kentucky has produced horses.

Not everyone felt quite so attached to the old place, though. M.R. Werner in Sports Illustrated offered a cooler opinion in May of 1959:

Jamaica, a strictly concrete, utilitarian race track, has always been more popular with $2 bettors, who sometimes bet 20s and 50s, than beautiful Belmont or the old Aqueduct, now being replaced by a dream track. At Aqueduct the salt breezes cooled off horseplayers now and then. At Belmont bettors had a grove of trees to sit under between races. But Jamaica, more constricted and looking like a betting factory, was never marred by such frills. Jamaica represented pure, pristine greed. It was always as ugly as sin. There was no place to sit down under trees. In fact, it was hard to find a tree, and the only place to sit was in the 17,500 seats in the grandstand and clubhouse. That never kept people away. The largest number of people ever to go to a New York track was at Jamaica on Memorial Day of 1945—64,670 paid, turnstile-registered patrons.

In his 2010 book about housing in New York City, Peter Eisenstadt offers a more measured assessment of the track and its importance in New York’s sporting landscape:

And yet, there was nothing second-rate about Jamaica Racetrack. In the early 1950s, with almost two million customers a year, the Jamaica Racetrack was the most popular sports venue in NYC, with a higher paid attendance than any of the city’s three baseball teams.

Jamaica was the Aqueduct of its time, and Aqueduct, just a few miles away, was the “dream track” under construction, receiving millions of dollars in upgrades, considered when it re-opened the finest sporting facility in the world.

Jamaica saw its share of New York racing history: Man o’War and Native Dancer won there; Morvich trained there for the 1922 Kentucky Derby; trainer Sunny Jim Fitzsimmons was based there and Seabiscuit won there.  No doubt Allen Jerkens could tell us stories of the years that he spent there.

William R. Conklin wrote Jamaica’s eulogy in the Times (noting that when the track opened in 1903, grandstand admission was $2, a dollar less than it is now at Belmont and Saratoga), writing with affection of the track known variously as “The Yard,” “The Factory,” “Foot Sore Downs,” and “The Meat Grinder.”  Ouch.

Jockey Eddie Arcaro, who won the 1957 Wood Memorial at Jamaica on Bold Ruler, couldn’t wait to get to the new, beautiful, modern Aqueduct.

“[Jamaica] doesn’t deserve any monument when it closes. The old jockeys’ room here was pretty tough. When Aqueduct opens on Sept. 14 we’ll get a new one and we’ll be glad to get it.” 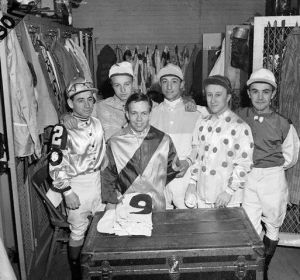 The hard core of 18,000 expanded to a sweltering 34,521 for the final session that ended fifty-six years of racing history. Of these, the great majority were sorry to see the old track reach the end of the road.

August 1 1959, Last Day of Racing at Jamaica Track. Eddie Arcaro looks out of window in Jockey House with Starter George Cassidy, who started here in 1929. Image by © Bettmann/CORBIS

Also check out Mary Forney’s and Kevin Martin’s posts on old racetracks, where I found some of these images. The racing photo is from Sporting News Illustrated, 1905; the photos of the old Jamaica track are from Corbis and are copyrighted.