John Gaver doesn’t look quite bulky enough to carry the weight of three generations of racing history. Tall, lean, and lanky, Gaver seems pretty unburdened in general, walking his shedrow at the Thoroughbred Center in Lexington, welcoming a guest, elaborating at length on the horses in his care. Utterly unassuming as he discusses his horses’ pedigrees, you’d never know, unless you know, that his own breeding includes racing royalty.

He is the grandson of John Gaver Sr., the Hall of Fame trainer of Tom Fool and private trainer for John Hay Whitney’s Greentree Stable. Growing up, he divided his time between Lexington, his hometown; Saratoga, where his father was training, having inherited the Greentree job; and Aiken, where his grandfather lived.

“I knew him as a grandfather, not as a famous horse trainer,” said Gaver. “I was a little too young to see him training and running the shedrow, and we didn’t really talk a whole lot about racing away from the racetrack. We talked a lot about New York Mets baseball and about growing flowers. He liked gardening.”

Nonetheless, the familial influence was hard to avoid.

“I’d go to Saratoga every summer, to spend time with my dad,” he recalled. “They had pretty much a private facility back there at Greentree. And it’s Saratoga, and just the whole aura of it, especially for a young impressionable kid, sticks with you. The horses were nice, and we were winning nice races. It was a privilege to have been around.”

“My father put me to work,” he continued. “I’d hold the hose, I’d tack up the pony. I wouldn’t say that my father discouraged me from training, but he always reminded me that there were other things out there. He wanted me to keep my options open.”

He laughed. “But he knew I loved horses, and I blame him for taking me around the barn.”

Gaver initially took his father’s advice about other options, heading west to earn an English degree at Lewis and Clark College in Portland, Oregon. But after graduating in 1986, he went back to the racing world, writing and handicapping first for Daily Racing Form and then writing for the Churchill Downs website in its nascent days. But even as he worked in an office, he moonlighted on the backside, hotwalking and grooming, and in 1995, he went to the backstretch full time, working first for Mike Bell, whom he credits with teaching him how to take care of racehorses, and then for Bill Mott, before going out on his own.

“I like to think I took the right path, working for Bill,” he said. “We were running horses all the time, I got to be around nice horses, and he’s a great horseman.”

Gaver started training on his own in 2007, when he was in his thirties. “I was scared to take that first jump,” he said, “but I thought, ‘the clock’s ticking, if I’m going to do this, I need to do it.’ I didn’t want to be the person that sat around later in life and said, ‘I should have given that a try.’ Better to try and fail than not try at all.” 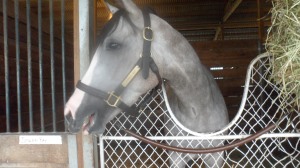 He’s currently got 11 horses in training; earlier this year, he had 17, including some two-year-olds and some rehabbing horses, many from Overbrook Farm, his primary client. Though he doesn’t bring many of those to the races himself, he considers his work with them an investment.

“I like to work with the young ones,” he said. “It’s nice to see them change, to look at them every day, and then all of a sudden, one day, it’s like, ‘Wow, is that the same horse?’ The light kind of comes on and you watch them progress. It’s kind of neat; they teach you something every day.”

Overbrook does leave some horses with him when they’re ready for the races, a result, Gaver believes, of his horsemanship and the way he works with them. “They’re a really good client to have,” he said. “I appreciate their work with me.” 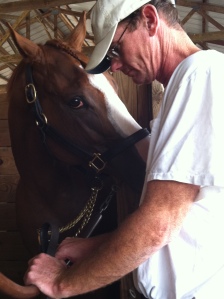 There’s reason for optimism at the Gaver barn. Taproot, a Pleasant Tap gelding out of a Green Forest mare, broke his maiden this summer at Ellis Park, then was second, beaten a head, in an entry-level allowance race at Kentucky Downs last month. High Alpine, a three-year-old Borrego filly, won at Ellis Park in July and again at Kentucky Downs last month. And Overbrook has left Ipswich Bay, a three-year-old Rockport Harbor filly, in Gaver’s care. She broke her maiden at Tampa earlier this year, though she has raced disappointingly since then.

Both High Alpine and Ipswich Bay are entered tomorrow at Keeneland; Taproot is being pointed to an allowance at Churchill next month.

And at the end of August, Gaver got to go to the winner’s circle as both owner and trainer, as four-year-old Mr. Jeeves, a Johar gelding, broke his maiden at Ellis.  Gaver bought him as a yearling and broke him in Ocala. Bucked shins delayed his first start until this year.

“It feels like we’ve been together a long time,” said Gaver, with more affection than frustration.

“It’s nice to finally see Mr. Jeeves put things together. I’ve trained him every step of the way, and he had a tough trip last time at Keeneland where he was boxed in on the rail and never got a chance to run until it was too late. The winner of that race, Tahoe Lake, came back to finish second in the Grade 3 Sycamore.”

Mr. Jeeves runs in brown silks with yellow hoops, the same silks used by John Gaver, Jr. “My father had a public stable for a while after he quit training for Greentree,” explained Gaver. “Those silks are my dad’s. I wanted to keep it in the family.” Gaver’s father died in 2002.

Gaver is more comfortable talking about his horses than he is talking about himself, but he doesn’t shy from the reality of his racing family and its legacy, a love of horses that clearly runs as deeply in him as it did in his father and grandfather.

“I can never really put my finger on what it is about horses that draws people to this game. It’s not the easiest way to earn a living, but there’s something intangible about it, and maybe that’s it: maybe the hope, the unknown, to get the next Zenyatta walking down the shedrow.

“It’s a labor of love. I still enjoy working with the horses every day.

“And when that stops, it will be time to look for something else.” 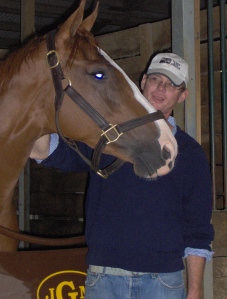 Most photos courtesy of Melaina Balbo Phipps, and used with her permission. Please don’t re-post them. Thank you!