It’s late afternoon on a February Saturday in Saratoga, and the sun is low in the sky; the temperature hovers just above freezing, and a chilling wind sweeps through the deserted shedrows of the Oklahoma training facility. There’s not a horse or a human in sight. Describing the scene as “desolate” would be charitable.

But as Michele Jennings and I pull up to barn 61 in her Jeep Cherokee, the scene springs almost magically to life. I’ve driven these empty roads and walked these empty shedrows dozens of times in the off-season, and I’ve never seen a feline.  But today, appearing from empty stalls and darting down long shedrows, leaping across patches of desiccated grass on which summer residents graze in more verdant times, a handful of felines converges at the end of the barn. They look warily at me, appealingly at her. They know her, and they know why she’s here.

Jennings knows their names and their stories; two years of daily visits to the track have sharpened her eyes, and she knows exactly how many cats are supposed to be here. She talks to them and calls them by name as she efficiently fills a large baking sheet with mounds of wet and dry cat food.

She nods towards a long-haired black beauty that flies down the shedrow and up the ladder into the hayloft. “When we first saw him,” she said, busily rinsing and re-filling water dishes, “he had no fur on half of his face, and he was skinny. He had an abscess so bad that it had eaten through his jawbone and into his mouth.”

Sick enough to let himself be trapped, he was transported to Quaintance House in nearby Greenwich, New York, to a clinic that cares for the Oklahoma cats when they’re sick. After a month of treatment, his infection healed, and Jennings returned him to the track, where he’s lived ever since.

As she puts down the food, several cats swoop in immediately; others stand off a bit, awaiting our departure. We have barely closed the car doors when they descend.

In the summer, when the Oklahoma is abuzz with activity, Jennings seldom sees the cats. They hide in haylofts and under buildings, and though she continues to feed them through the racing and “shoulder” (pre- and post-racing) seasons, they don’t require as much care then as they do when the Oklahoma is abandoned and the cold weather sets in. Their need for food after the racing operations have departed makes them more visible, and also easier to catch: it’s during the shoulder seasons that Jennings traps cats so that they can be neutered and returned to their colonies.

We stop next at barn 75; Jimmy Jerkens, its summer inhabitant, would likely be surprised to see the friendly felines inhabiting his stalls since his departure. And friendly they are, allowing Jennings to pet them; one even ventures to me and rubs her head on my knees, skittering away when I try to scratch her ears.

Jennings has been feeding the Oklahoma cats for two years; the front office manager at the Inn at Saratoga, she comes to the track on her way to or from work, and on her days off. She is the front-line volunteer in the joint effort of the New York Racing Association, the Moore Foundation, and Quaintance House to care for the Oklahoma’s feral cat colonies.

Susan Moore is best known to those in racing as the owner, with her husband John and their M & M Thoroughbred Partners, of such horses as Zaftig, Doremifasolatido, Smokey Glacken, and Lager. An animal lover her whole life, she set up a foundation more than a decade ago to help take of injured and sick animals.

For years, Moore brought food to the cat colonies at Belmont and Saratoga, and two years ago, she worked with the New York Racing Association to set up an official program at the Oklahoma, joining forces with Quaintance House so that the cats can be spayed and neutered and have their health needs taken care of.  The Moore Foundation and the New York Racing Association both fund the program.

Quaintance House is a non-profit animal care clinic overseen by Chris Boudreau; its work goes far beyond taking care of the Oklahoma cats, but when a program for taking care of them needed to be established, Boudreau reached out to Moore, whom she described, in what I have to imagine is an understatement, as “extremely receptive.” And when a volunteer was needed to take care of the cats at the track, Jennings, who has volunteered with Quaintance House for more than 10 years, stepped up.  She and Boudreau work closely with Moore to make sure that the cats’ medical needs are taken care of, and that as many of the cats as can be caught are spayed and neutered.

David Smukler, senior vice president of human resources and labor relations at NYRA, is the track’s point person on this initiative, and he expressed his appreciation for Moore’s and Quaintance House’s efforts. “This is a racetrack, and it’s not surprising that there are a lot of people here who love animals. I’m glad that we finally crafted a program that works, and Susan Moore gets all the credit for putting her money where her heart is.”

This year, Jennings is grateful for the mildness of the winter; I make the rounds with her on one of the coldest days of the season, but it’s still above freezing, and the ground has only traces of snow.  “Last year,” she says, recalling one of Saratoga’s snowiest winters in memory, “I was out here with my shovel, digging out the feeding stations.”

Boudreau, Moore, and Jennings all express gratitude to NYRA and its winter staff, particularly the maintenance workers whose plowing permits Jennings access to the barns, and the security staff, who helps them with their badges and entry.  Says Boudreau, “They talk to us about the cats, and they seem to enjoy them, especially when the people leave and the cats are more visible.”

“But,” she says, “Then I get here and I see them, and I’m glad I’m here. It’s ridiculous how much joy I get from doing this.” 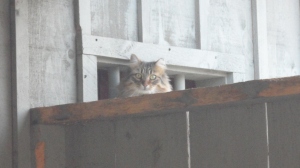 Click here to learn more about and donate to Quaintance House, which currently houses approximately 50 special needs cats and operates a non-profit clinic several days a week; you can also keep up with the organization’s news on its Facebook page.

To learn about the Moore Foundation and donate specifically to the care of the Oklahoma cats, click here.

7 thoughts on “Winter at the Oklahoma: The Cats Come Out”