“On a quiet evening or a Sunday morning, when there’s nothing happening, I think you can feel it. They talk of ghosts on the farm, especially at the old training barn.  Kind of makes you wonder sometimes.  Who’s to say that there aren’t certain spirits here?”

Tom Mullikin smiles as he says it, but with “AVG” in red letters behind him, it’s awfully tempting to believe him, to think—to hope?—that racing spirits are all around us. 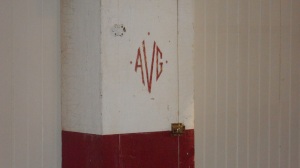 We’re standing in the offices of Sagamore Farm in Glyndon, Maryland, less than 20 miles from Pimlico, and when I walk into the space that was formerly the machine and carpentry shop, the first thing I see is an old wooden cabinet emblazoned with the initials of Alfred G. Vanderbilt, Jr., the man who owned Sagamore from 1933 to 1986, the man who bred and raced Native Dancer from this farm, the man who dropped out of Yale to devote his life to Thoroughbred horse racing.  (click on photos to enlarge)

There remain few such vestiges of the Vanderbilt years, according to Mullikin, the farm’s manager.  Still, that legacy is everywhere, tangible or only remembered. It’s impossible not to think of the humans and horses that walked the paths of this farm for much of the 20th century.

In Native Dancer: The Grey Ghost, Hero of a Golden Age, John Eisenberg described Sagamore at the mid-point of the last century:

[Sagamore was] regarded as Maryland’s finest horse farm. Incorporating twenty buildings and seventy full-time employees in three divisions—breeding operations, training operations, and maintenance—the farm had immaculate barns, fences and paddocks, an outdoor racing strip, and a quarter-mile indoor track for winter gallops; a kitchen, chef, dining room, and dormitory housing for the staff, and a large house for [farm manager Ralph] Kercheval and his wife.

By 2006, the picture was much different.

“It was in really bad shape,” recalls Mullikin. “The whole place needed improvements.”

Fortunately, the farm’s new owner was willing to make the investment. Vanderbilt had sold the farm to developer John Ward in 1986, and in 2007, Marylander Kevin Plank of Under Armour purchased it, determined to restore the farm to its historical place in the racing and breeding world.

“He had grand ambitions,” says Mullikin, “and he was well aware of the history of the place.”

They started with the fencing, says Mullikin, then slowly began renovating the barns and re-doing the 7-furlong track over which such horses as Discovery, Native Dancer, and Bed o’Roses trained.

“We looked out for the pastures, too,” notes Mullikin, “putting resources back into the ground. We started off slowly; we’re not flash in the plan guys. This is about the next 20 or 30 years.”

We’re standing at the edge of the training track, watching three 2-year-olds move slowly over the surface. “When we got here,” remembers Mullikin, a Maryland native who learned the racing business at Machmer Hall in Paris, Kentucky and Edward Evans’ Spring Hill Farm in Casanova, Virginia, “the track was weeds and rocks. I wouldn’t even jog over it. All the rails were down.

“I never envisioned training here until Kevin said, ‘Re-do the track.’  We used the footprint of the old track and laid down a Tapeta surface over it.” He smiles. “There are recycled Under Armour shirts in the track material. Michael Dickinson was up for it, and we thought it was really neat, to make the track our own.”

He barely finishes the sentence when he points out the clockers’ stand overlooking the track. From detailing the farm’s present, he delves into its past.

“That’s the original clocker’s tower. That’s where Vanderbilt and his trainer, Bill Winfrey, watched Social Outcast and Native Dancer as 2-year-olds.  In the book, Eisenberg explains that they’re up in the tower watching them work, and that’s when they realized how good Native Dancer was.”  He pauses.

“It’s neat to stand there and think that we’re in the same spot.”

While Sagamore boasts a new track and renovated barns for the three dozen or so horses currently on the farm, its most imposing structure may be the one that will be untouched for years to come. It’s the old training barn, the first building put up on the old farm, the one with the ¼ mile indoor gallop that Eisenberg described.  According to Mullikin, there were 90 stalls in the original structure, and he estimates that it would cost four or five million dollars to renovate. Its restoration is part of the long view, he says, and when it’s finished, he jokes, he’ll be the one coming back to haunt it. 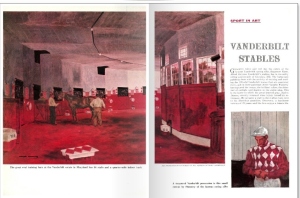 Down the hill, we walk into the old stallion barn, and there they are again, those initials. In perhaps his greatest understatement of the morning, Mullikin remarks, “This is a neat old tack box.”

It sits outside of Native Dancer’s stall, and Mullikin describes an old picture, taken from where we are currently standing.

“There’s a really cool picture of Native Dancer and his groom; the groom is on a chair with a bunch of dogs around him, and Native Dancer has his head hanging out, leaning down, sniffing the dogs.” 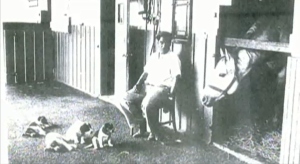 from "Inside Information: Native Dancer/Sagamore Farm"

But…there’s hay in the stall?

Mullikin smiles.  “Kevin has these Preakness parties, and one year it was down here. We got an old grey riding horse, a retired Thoroughbred, and for the party we put him in here. ‘Look!’ people said. ‘It’s Native Dancer!’”

He tells another story, this one of a group of veterinarians holding a meeting in nearby Hunt Valley who came out to visit the farm.

“A group of Russian vets who didn’t speak a lick of English came here with an interpreter. So I brought them in here and told them this was Native Dancer’s stall. They started taking pictures and one of them went in and started touching the walls.

“At first I thought, ‘What is this, Graceland?’ And then I thought, ‘That is really neat.’

“Sometimes, when you live here, you lose perspective on how cool it is. It means a lot when you see other people’s reactions. They get it, and that’s cool.”

Our last stop is at the cemetery, the cemetery where 12 Sagamore notables are buried, memorialized by simple headstones. There are no monuments, no statues. “That’s kind of the neat thing about this farm,” says Mullikin. “It has a certain class to it, but it’s also a working farm. There’s nothing that’s really over the top, and it’s not this big grandiose thing. That goes back to Mr. Vanderbilt.”

While only the head, heart, and hooves of most horses are buried, the Sagamore horses were buried whole. “That was the tradition,” says Mullikin.  “They were buried whole, with their blanket and halter, and with a bag of treats.” 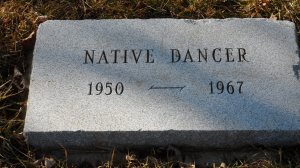 We pause over the grave of Native Dancer, Sagamore’s most famous son.  He won one of two divisions of the Gotham in its first running; it will be run for the 59th time tomorrow, and one of Native Dancer’s great-great-great grandsons, Tiger Walk, will run in the colors of Sagamore Farm, whose crimson diamonds allude to Vanderbilt’s cerise design. He’s a co-fourth choice at 12-1; his ancestor went off at .15 – 1 and won by two lengths.

Vanderbilt silks on display at Hialeah

Even as the new Sagamore creates a new and vibrant presence in racing, it evokes and embraces its past. “Sagamore’s not the kind of place that…anybody owns, as much as you take care of it for a period of time,” said Plank. Mullikin echoes the sentiment, saying, “We’re stewards of this place.”

They have their own racing dreams ahead of them, dreams of a Derby win and a Triple Crown; they’ve already won a Breeders’ Cup, with Shared Account in 2010, and Millionreasonswhy won the Matron last year before finishing second by a neck in the Adirondack to eventual champion My Miss Aurelia. Their filly comes back tomorrow at Laurel.

But they don’t ignore what came before them, and walking around the farm, it’s easy to sense old racing ghosts, particularly a grey one, who continues to make his presence known.

Native Dancer in retirement at Sagamore, from Sports Illustrated, May 4, 1959 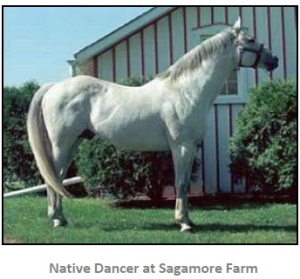 19 thoughts on “Present and Past at Sagamore Farm”