Since Doug O’Neill, I’ll Have Another, and Lava Man arrived on the Belmont backstretch, they have not lacked for visitors. Writers, photographers, fans, and visitors have flocked to their barn, and by all accounts, O’Neill has been an affable and friendly host, handling the crush with aplomb.

Last week, Team O’Neill welcomed the children of Anna House, the most recent of Belmont Stakes visiting connections to share their time with the children of the backstretch workers. In 2008, Casino Drive’s connections spent time at Anna House, and the following year, Chip Woolley came to visit the children, beginning a relationship that lasted long after he left New York.

The children waited patiently for O’Neill to finish his morning conversations with the press, then presented him the sign they’d made to wish good luck to him and I’ll Have Another.  Their visit ended with a chance to meet Lava Man and to hear the stories of his successes on the track. 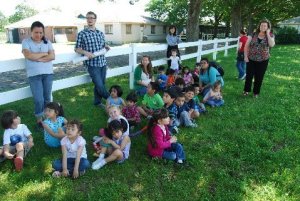 As a member of the Belmont Child Care Association’s board, I’m grateful for the trainers and owners who make time to visit with the children and to learn about the good work of the BCCA. Anna House is the only child care center in the country that is located on the racetrack and that serves the backstretch community exclusively, opening at 5 a.m., 365 days a year.

Earlier this month, about 20 miles away from Anna House’s home at Belmont, Thoroughbred owner Megan Judge of Standard Racing teamed up with Yael Levertov to offer the chance to do a little shopping and benefit the backstretch children at the same time.

Judge’s horses are trained by Tom Bush, whose barn is located not far from Anna House, and after seeing the children outside playing, Judge wanted to do something to support the work of the BCCA.

“I wanted to share racing with my friends, who often come to Saratoga with me to go to the track; a lot of them are having children now, so I thought that they might get into buying some clothes for Saratoga and raising money for a really good cause,” said Judge.

Judge lives on the Upper West Side and is friendly with Levertov, who opened Shishi (2488 Broadway, between 92nd and 93rd) a year and a half ago. According to Judge, the shop offers fun clothes that are reasonably priced, so she and Levertov brainstormed a way to hold an event there.

Levertov offered to donate a percentage of sales on May 16 from 7 to 9 pm; Judge’s Standard Racing matched those donations. TD Bank and Judge’s friend Clay Sanders also contributed, bringing the total money raised to a little over $2,000. 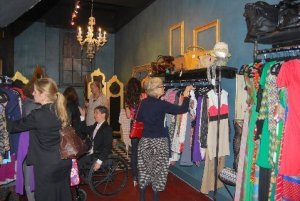 Yael Levertov and Megan Judge. Photos courtesy of the BCCA

BCCA board members Libby Loftus, Eloise Canzone, and Nancy Kelly attended, as did Flying Zee’s Viane Lizza. This particular board member was at Madison Square Garden, watching the Rangers lose to the Devils, but I’ll be heading up to Shishi to do a little Saratoga shopping myself, and I hope that if you’re in the neighborhood, you’ll stop by, to support the shop that supported the children of Anna House. 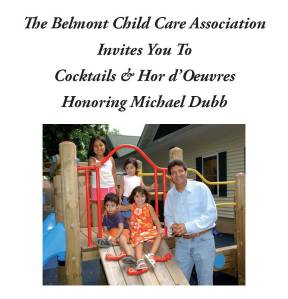 Michael Dubb with the children of Anna House

Finally, if you’re around Belmont this Friday, June 8, Belmont Stakes eve, you are cordially invited to a cocktail party at Anna House to honor Michael Dubb, chairman of the BCCA board and the man without whose generosity Anna House wouldn’t exist. The event will take place from 6 pm to 7:30 at Gate 6 on the Belmont backstretch; you can RSVP at 516 488 2103.  Many thanks to the New York Racing Association, which is sponsoring the event.