It’s been quite a summer for Barbara Banke and Stonestreet Farm.

On opening day of the Saratoga meeting, they sent out their first 2012 Spa starter in the fifth race. Kauai Katie, named for Banke and Jess Jackson’s daughter who was recently married in Hawaii, won by 12 lengths.

Since then, Stonestreet has started five runners at Saratoga, and they’ve all ended up in the winner’s circle. Teen Pauline, Dominus, My Miss Aurelia, and Dreaming of Julia all won their Saratoga starts, and yesterday, Kauai Katie made it two-for-two at the Spa with a win in the Grade II Adirondack. The combined margin of victory in the six races is 37 ¼ lengths.

In the 16 months since Jackson’s death, Banke has admirably taken the helm of the racing operation Jackson established, overseeing one of the most eagerly anticipated births in equine history, instituting a social media campaign that has brought fans to Stonestreet Farm in Lexington, and continuing the tradition of racing success that brought the farm three consecutive Horse of the Year awards (Curlin 2007 and 2008, Rachel Alexandra 2009).

Later this month, at the Belmont Child Care Association’s annual Saratoga fundraiser, Banke will be honored for her work off the racetrack. She and Jackson have long been supporters of Anna House, located on the backstretch of Belmont Park; open 365 days a year at 5 a.m., Anna House offers low-cost child care and early childhood education to the children of backstretch workers, thanks to the support and generosity of people like Banke. I am honored to serve on the BCCA board of directors. 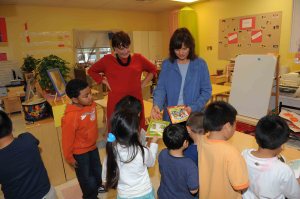 “When Barbara and Jess were first starting out in the wine business, they had five kids,” Chenkin recently said. “They didn’t have a lot of money in those days for babysitters, so they had all the kids at the vineyard, and it was really difficult for them. Barbara never forgot the struggles that the two of them had, in having children and caring for them and working. She understands child care and what it means to need it.”

“I think one of the jockeys first told me about Anna House,” said Banke this summer, after her champion 2-year-old filly My Miss Aurelia returned victorious to Saratoga last week.

“Jess and I were looking for some horse-related charities for some of the babies and fillies to run for, and that was one that we picked as a really good one.”

“It’s wonderful to be honored by the BCCA, and I am humbled,” she went on. “There are so many people that really support that charity.”

This year’s BCCA event will take place on August 22 at the Gideon Putnam Hotel. Wildly successful each year, the party attracts trainers, owners, and jockeys who understand the value of Anna House’s services and who are willing to offer their time and money to support them.

The evening includes cocktails, dinner, and a live and silent auction; it’s a light-hearted and fun party, one of the few for which it’s perfectly acceptable to show up in jeans, especially this year, and its auctions offer temptations even for people without hundreds to spend.

On offer will be jewelry, racing memorabilia, tickets to sporting and entertainment events, and art, among many other items. BCCA board member Maria Repole has donated a diamond necklace to the auction; also up for bidding will be a villa in Tuscany; a trip to California wine country, and a private jet to the 2013 Derby.

More modest budgets might find appealing halters that were worn by Curlin, Rachel Alexandra, and Union Rags. This year, one item will honor another big BCCA supporter: trainer D. Wayne Lukas, who acts as the event’s auctioneer. Lukas started his 45th horse in the Kentucky Derby this year, so attendees will find a large stuffed horse with Optimizer’s halter and his saddle towel from the Derby, signed by the trainer. “We thought we should mark this milestone,” said Stuart Chenkin, who in addition to being Donna’s husband works tirelessly on behalf of Anna House children.

The BCCA also accepts donations of American Express rewards points, which the organization converts to cash used to buy auction items to offer.

That the BCCA summer party always sells out is a credit to the racing community who supports the work at Anna House; tickets, which are $250, are still available but going fast.

If you’re interested in donating time, money, or an auction item, or in purchasing a ticket to the event, visit the BCCA website, contact me here or in the comments, or call Anna House at 516 488 2103.

This summer at Saratoga has offered Banke multiple opportunities to celebrate, and on August 22, we will get a chance to celebrate her, along with Jess Jackson’s legacy to the children of Anna House.

“We wanted to honor someone who not only donated to the BCCA but also was a supporter of early childhood education, other equine and non-equine charities,” said Stuart. “No one fit that description more than Barbara.”

3 thoughts on “Barbara Banke and the Belmont Child Care Association”