On Monday afternoon, Allen Jerkens got his second win of the Saratoga meeting. Both victories came in stakes races, both with fillies. In the winner’s circle, he seemed as overwhelmed and touched by winning the Saratoga Dew, an overnight stakes with a purse of $100,000 as he did when he won the Grade 1 Prioress with Emma’s Encore.

The race was not Jerkens’s first encounter with Saratoga Dew, the New York-bred who was champion three-year-old filly of 1992. She was bred by Penny Chenery, trained by Gary Sciacca, and owned by Charles F. Engel.  She raced only as a three-year-old, making 11 starts.

She won her first five races, including the Grade II Comely at Aqueduct; after a loss in the Post-Deb Stakes at Monmouth, she won the New York Oaks at Finger Lakes in July, and then she came to Saratoga for the Alabama.

There, she met Jerkens’s November Snow, who had raced mostly in Florida until July of 1992; her first start for Jerkens was at Belmont, a third-place finish.

On August 1, she won the Grade I Test, and two weeks later, she came back to run in the muddy Alabama.

“All you could see were the white of her eyes…the rest of her was covered in mud,” recalled Jerkens on Tuesday morning.  “She was last.

Saratoga Dew, who led for every step of the race except the last one, nearly held on, losing by a nose when November Snow under Chris Antley came surging up the rail to snatch the victory.

As Jerkens tells it, Antley wasn’t supposed to ride the horse, even though he’d been aboard for the Test. Antley was committed to ride Turnback the Alarm, but when that horse was injured, Antley was named on November Snow.  Reportedly, November Snow’s owner, Earle Mack, paid both jockeys.

If a last-second, nose victory weren’t exciting enough, Jerkens then had to wait through an objection, after jockey Jerry Bailey, on the fourth-place finisher, claimed foul against his filly. The objection was not allowed.

November Snow would have the longer career, racing 11 more times, winning the Grade II Rare Perfume, finishing third in the Grade I Go for Wand. She earned $554, 628.

Saratoga Dew’s career was brief but more brilliant. She won the Gazelle and the Beldame, both Grade I, before faltering in the Breeders’ Cup Distaff, a loss that didn’t impede her championship chances. 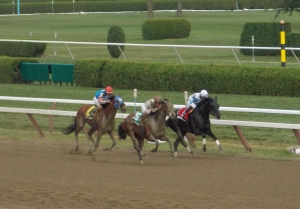 On Monday afternoon, Jerkens’ horse once again ran down a pace-setter, catching Opus  A in the stretch, but this time, his filly cruised home by 6 ½ lengths; there were no nervous moments, there was no objection, there was no suspense.

As he left the Saratoga’s winner’s circle, a throng awaited him, to congratulate him and to ask for autographs, requests he accommodated.  Another of his fillies had just won another stakes race, but it was he who was the star. 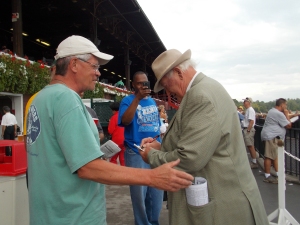 2 thoughts on “Allen Jerkens at Saratoga: Another filly, another stakes win”