Steinmann and Maggie Mae, for whom her business is named

December is, some would say, much too early to start thinking about the Kentucky Derby.

Not Sally Faith Steinmann. Her Kentucky Derby musings begin long before the final 2-year-old stakes races of the year, long before the Breeders’ Cup. In fact, she’s thinking Derby before Saratoga and Del Mar have even ended their summer meets.

Since 2009, Steinmann has been designing Derby hats and auctioning them off to benefit Old Friends; beginning in November, she offers a hat a month, each inspired by a particular Old Friends retiree. She kicked off this season’s auction with Rapid Redux, and December’s hat honors Dancin Renee, the New York-bred mare who won the Honorable Miss (GIII), the New York Stallion Series Park Avenue, the Broadway Handicap, and the Regret Stakes. She was 1997 New York Champion Sprinter and Champion Older Female, and as a broodmare, she produced Risky Rachel, winner of $377,000 and multiple stakes races for New York-breds. 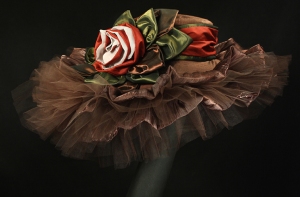 The auction kicked off on December 1 and bidding currently stands at $405. If past auctions are any indication, that figure will go much higher; in January 2011, her Creator hat, in honor of the British-bred son of Mill Reef who won multiple European stakes races, fetched $1,425.

Steinmann’s affinity for horse racing predates her millinery business by decades; the Cape Cod native grew up watching the Triple Crown races, the 1969 series in particular.

“Majestic Prince was my first true love horse,” she said. “I was crushed when he didn’t win the Belmont.”

She was crushed again in 1975 when Ruffian broke down, and though she didn’t know it at the time, that incident would lead indirectly to her involvement, nearly 30 years later, with horse welfare.

After Ruffian, Steinmann took a break from watching racing, though she would hear about the big races and the big names. It would take another famous breakdown to bring her back to the sport.

“When Barbaro broke down, I was having a harder time than ever,” she recalled. “But I saw so many people really caring about the horses and trying to make a difference, and as an artist, I felt compelled to try to express what I was going through.”

So she made a hat inspired by Barbaro, calling it “Run for the Roses.”

She had not at that point been making hats for long; after studying music earlier in her life, she returned to Wellesley as a mature student, graduating with a degree in psychology and women’s studies. She was interested in documentary film work, but one day her mother gave her a knitting pattern for what she described as “an enormous wool hat.”

“And after that,” she said simply, “I was hooked.”

She made hats, she trimmed them, she sold them to summer visitors to Cape Cod. She moved from felt and wool to silk, linen, and organza, building up a clientele in small galleries.

She went back to school again, this time to learn how to create a website, and before long, she said, “Horse people started to find me. My hats were going to the Kentucky Derby and to Ascot.”

And so, slowly, she found her way back to the track.

She had already begun featuring horse welfare organizations on her website and she decided to go a step further, to create hats specifically to raise money for horses.  Although at first she thought she’d divide auction proceeds among several organizations, she quickly made the decision to focus on Old Friends, each hat inspired by one of the farm’s retirees.

“I’m home with Old Friends,” she said, adding wistfully that she hasn’t yet visited the farm in Lexington, Kentucky. “My hats and my husband have made it there. I’m next.”

As she begins to design each hat, she does hours of research, watching videos of the horse’s races, looking at footage and photographs.

“I drive the people at Old Friends crazy,” she said. “I call all the time asking about the horse’s personality.”

Where possible, she incorporates the colors of the owners’ racing silks; sometimes, she says, her observations on a horse’s conformation will find its way into the curve or shape of the hat’s brim.

Steinmann’s millinery goes beyond her Derby hats; she creates custom hats for a variety of occasions, and they’re on display at her website, Maggie Mae Designs, named for her late cat.

“I lost her about two years ago,” said Steinmann. “She had diabetes, and she was such a little trooper. There was never a question that I’d name my business for her.”

In the way that felines do, Maggie Mae “helped” Steinmann, hanging out in her studio, nestling among fabric and ribbon, playing with millinery tools. And though she still misses Maggie Mae terribly, she knows that her cat lives on in her business. 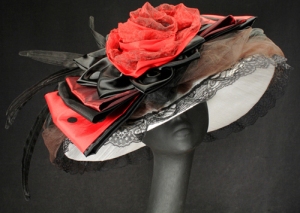 The auction for Steinmann’s Dancin Renee hat will end on Tuesday, December 11; the next horse to be honored in this year’s Derby sequence will be announced later this month. And while handicappers are creating lists of possible 2013 Derby contenders, Steinmann will be dreaming of how best to represent racing’s retired favorites, in hats that will, like those promising two-year-olds, show up at Churchill Downs on the first Saturday in May.