(Update: bad weather cancelled racing at Oaklawn on Monday; Brian will be back later this week with updated analysis.)

#1 J S Bach (4-1): Speedy Pletcher shipper ran off and hid from an overmatched MSW group last time at odds-on going today’s distance, and now he gets thrown into the deep end of the pool to see where he stacks up on the national scene. Son of Tale of the Cat drew perfectly for this two-turn tilt, and his speed should put him on or near the lead in a race in which there’s surprisingly very little early foot signed on. For most, this rise might be too much to overcome, but it is Pletcher we’re talking about, plus there’s not a lot in here in terms of overwhelming talent, so you have to think this colt will take some beating, lack of inexperience and all; seems the one to catch and beat. 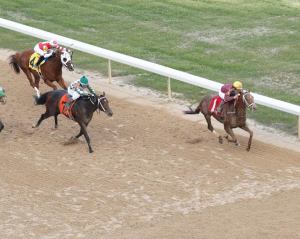 #2 Far Right (3-1): Tepid ML favorite beat a bunch of these when he stormed from last of nine to run by them all in the local prep, the Smarty Jones, and will once again look to close from far back and win his first graded stakes. On the face of it, that last win was pretty nice, but look again and you’ll see that heavy favorite Mr. Z seemed well on his way to winning before taking a right turn in the stretch, not to mention this Moquett charge got some pace to rally into, which may not be the case today. Notional colt also has the look of a bounce candidate, as his last was by far a career best run, which means regression might be every bit as likely as a move forward, so with that in mind let’s make him prove it; trying to beat at false odds.

#3 Private Prospect (15-1): Price player wasn’t beaten much when fourth in the Smarty Jones, and his tactical speed and an inside draw should ensure a good trip in the second flight. Of course, he’s got to turn the tables on the top three from last time, not to mention a few new shooters, so it’s not like the hurdles are insignificant. On the plus side, Campbell is 25% second off the layoff, and this son of Discreet Cat has the look of an up-and-comer, so if he’s overlooked on the board, you could do worse than fitting him in your exotics; eligible to outrun his odds.

#4 Bayerd (8-1): Tricky read was a solid second in the Smarty Jones in his first two-turn start on dry land and goes for a powerful Asmussen barn that knows how to handle a nice 3-year-old, though he really hasn’t shown a big forward move after six starts, so it’s tough to envision it coming today. His running style should put him in the mix throughout, likely just off the early pace, and we’ve seen these Speightstowns outrun their pedigree time and again, so that really isn’t a concern. But, like anyone exiting the Smarty Jones, he’s got a few new toughies to tangle with, and his finish may have been flattered because of the bad behavior that Mr. Z showed during the stretch, so it’s tough to think he’s a legitimate win threat; underneath, if at all.

#5 The Truth Or Else (20-1): McPeek longshot hasn’t been out since running sixth in Aqueduct’s GII Remsen to close out his 2-year-old campaign and will try to win at two turns for the first time while adding Lasix for this tilt. Son of Yes It’s True isn’t bred for this and hasn’t shown any stretch stamina in three starts against winners—albeit some salty winners—so he looks a little out of his element here, even though this is a class drop from what he’s been facing. Midpack stalker had no chance in the Remsen, as it was run over a heavily speed-favoring track, but even so, his prior distant third-place finishes in Belmont Park’s GI Champagne and Aqueduct’s GII Nashua don’t really stack up with this crew; not seeing it.

#6 Kantune (15-1): Sharp local track and distance MSW winner steps up for Casse and will look to build on that lifetime best run, which was his first over the local oval. Kantharos colt didn’t really break through in six California starts over synthetic, turf, and dirt, so you’re allowed to think he really likes this strip, which makes him mildly intriguing. The post works, too, as he should be able to set up shop just off the speed and attempt to get first run off the far turn, and at a nice price with a win over the track, that’s not a bad plan of attack; could very well spice up your exotics.

#7 Phenomenal Phoenix (30-1): Seemingly overmatched Summer Bird gelding enters off a meek second in a slow optional claimer over the track and distance, and he really gets thrown to the wolves by Von Hemel today, as he’s never shown in any of his four runs that he can play with a group like this. If you’re looking for positives, then hang your hat on a proven local barn that usually doesn’t run them where they can’t compete, plus the addition of blinkers today could add some more speed to the package and wake him up a bit–though when you throw your resume down on the table with just a Remington Park MSW win as your main selling point, it’s not likely you’ll be getting a second interview; easy toss.

#8 Majestico (30-1): Speaking of longshots, the first of two from Lukas hasn’t run a lick in two main track starts after showing a ton of promise on the grass, so even for the Coach, this is a stretch. Sire Majesticperfection was a pure sprinter, too, so that compounds the problem even more, since not only has he shown he doesn’t want to dirt, but he’s not bred for the trip, either. Fans of his Hall of Fame trainer will no doubt point to the countless victories Lukas has had with runners who don’t belong in races like this, and while that is no doubt true, it’s tough to envision this talented turfer adding to that list; anxiously awaiting a return to the green stuff.

#9 Bold Conquest (12-1): Asmussen’s second makes his first start since October, when he was a well-beaten third to Pletcher heavyweight Carpe Diem in Keeneland’s GI Breeders’ Futurity (and some 5 3/4 lengths behind Mr. Z), but he did show two-back that he’s got some talent, when second, beaten a neck in CD’s GIII Iroquois. Both of those runs were at today’s distance, too, so it’s nice to know that there are no limitations, which you wouldn’t expect anyway as dad Curlin was as talented a router as we’ve seen over the last decade or so. Versatile runner seemingly can be placed anywhere, and his works, especially those back-to-back bullets in January, certainly whisper “ready,” so in a race where the proven local contenders are still trying to sort themselves out and prove they belong in a spot like this, you have to think this guy is going to have a big say in the outcome; figures to make his presence felt.

#10 Mr. Z (7-2): Typical Lukas throwback of old is as battle-tested as any 3-year-old in the country and has danced basically every dance he could since last July, while ducking no one and running well in a bevy of tough spots, so you know this son of Malibu Moon is going to hit hard today. You also know that he absolutely freaked in the stretch of the Smarty Jones, when he was well clear after pressing the pace before deciding to drift out badly and throw certain victory away. So what you want to do today is a mighty tough quandary, considering that he’ll be another (relatively) short price and that he’s lugged out in his last two (he also did it when losing a thrilling renewal of the GI Los Alamitos Futurity when third by a head), which could signal that something is amiss and that he’s ready to go off form drastically. On paper he’s the one to beat and also the one who should trip out best of all, but there’s little denying that that last run left a very bad taste in the mouth; tread lightly if landing here.

#12 Bold Animaux (30-1): Rank outsider invades from Florida and makes his first start for Biehler after winning a Tampa Bay Downs claimer on the turf in his last. Son of crack turf miler Leroidesanimaux (Brz) has never run on the main track in five lifetime starts and sure picks a heck of a spot to try it for a barn that is 0-for-14 at the meet. You can take solace in the fact that his three lifetime wins tie him for the most in the field, but there’d be a heck of a story if that number clicked to four late Monday afternoon; looks completely overmatched.