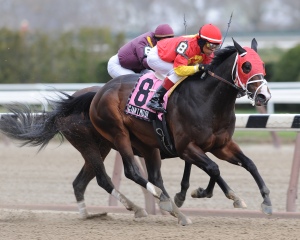 Growing up on Long Island, Albert Fried Jr. started riding horses, he says, when he was about 10 years old, in the early 1940s.  A talented horseman even at that young age, within a few years he was given an assignment that, if a little hyperbole can be forgiven, may well have changed the course of racing history.

“I was friendly with a girl who rode at the stables with me,” he recalled, a sly delight in his voice, “and her father, a man called Sidney Schupper, thought he’d like to buy a horse.”

The way Fried tells it, the inexperienced Schupper, who owned a trucking company, went to a local Thoroughbred auction and purchased a pretty much sight-unseen filly for $2,000.  By the 1935 Horse of the Year Discovery, she was given the name Miss Disco and sent to the stable at which Fried rode to be broken for racing.

“They told me, ‘Yeah, you know how to do it, break her in,’” Fried reminisced.

She would go on to be a multiple stakes winner, her victories including the 1947 Test Stakes at Saratoga, but it was her post-racing career, after she was sold to Claiborne Farm’s Bull Hancock, that put her name in racing’s record books.

“I broke the most famous broodmare in racing history,” Fried jokingly boasted of the dam of Bold Ruler, sire of Secretariat.