Saturday, August 8 was a pretty big day at Saratoga Race Course. The inaugural Whitney Racing Festival featured five stakes races, three of them graded, the centerpiece the 88th running of the Whitney Stakes.

Kendrick Carmouche had mounts in three of those races. He finished last in the first one, on Joint Return in the Fasig-Tipton De La Rose. In the Test, his filly Wonder Gal stumbled out of the gate, ending up eighth.

But the third time was the charm, and aboard Goldy Espony in the Grade 3 Fasig-Tipton Waya, Carmouche went right to the lead, dangling tantalizingly in front of the field of 10 to win by 3 1/4 lengths, for his first graded stakes victory in New York. 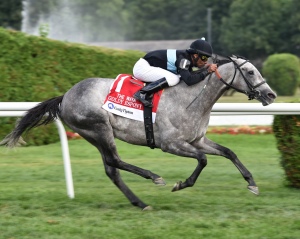