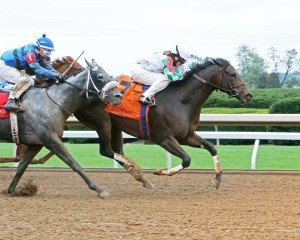 On the Friday of Breeders’ Cup weekend, Sophie Doyle was enjoying a rare recreational day at the racetrack. She’d been out in the morning as usual to work horses at Keeneland, then traded her riding clothes for a dress and heels to watch her brother James ride Birchwood in the Breeders’ Cup Juvenile Turf for trainer Richard Fahey.

They finished third by less than a length at odds of 18-1, a satisfying finish, said Sophie. But one gets the feeling that nothing less than a win on her own Breeders’ Cup longshot mount would elicit the same reaction on Saturday afternoon.

Doyle makes her Breeders’ Cup début today in the $1m Filly and Mare Sprint, riding the mare that brought her her first graded stakes victory, in the Grade 2 Thoroughbred Club of America over the same track that she’ll ride today.

Doyle paired up with Fioretti in May for the first time, riding her to a fifth-place finish in the Unbridled Sidney Stakes at Churchill Downs. Since then have come two wins and a second, and with them an ascension to the spotlight at one of North America’s most prestigious racing events.

“Going into the TCA, I was almost telling myself I can’t lose,” said Doyle. “I was beaming and smiling.

“And then after, it was just amazing, almost like, ‘How did that happen?’”

Continue reading at The Guardian...