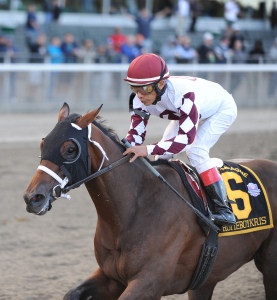 Homeboykris winning the Grade I Champagne with Edgar Prado at Belmont Park in 1999. He was one of two horses to die at Pimlico on Saturday.

Horse racing found itself in the spotlight on Saturday afternoon but not quite in the way that it wanted to.

The day was supposed to be about the 141st running of the Preakness Stakes, about the undefeated Nyquist trying to keep his record intact, about the possibility of another Triple Crown run at Belmont in three weeks’ time.

Instead, hours before the 6.45 pm post time for the Preakness, media outlets across the country were sending out alerts that two horses had died in the first four races, People for the Ethical Treatment of Animals had put out a statement on the two deaths, and social media was awash with the story.

Continue reading at The Guardian…

2 thoughts on “Equine injury and mainstream media: a bad exacta on Preakness day”