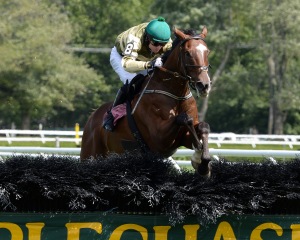 On Thursday at Saratoga, seven-year-old All The Way Jose will make his fourth start of the year in the Grade 1 New York Turf Writers Cup Handicap. The former flat runner is 8-1 on the morning line, and looking for his first win at the Spa since an allowance race in 2014 when he was ridden by Willie McCarthy, his regular rider until earlier this spring, when Gerard Galligan got in the saddle for one start.

Then apprentice jockey Keri Brion, the assistant to All The Way Jose’s trainer Jonathan Sheppard, climbed on board. She rode him to a runner-up finish and a win, then came to Saratoga to ride him in her first race here, the G1 A.P. Smithwick Memorial Handicap. It didn’t end well, with Brion tumbling off after the bay gelding hit the 6th fence.

And when All The Way Jose hits the turf for the Turf Writers, Brion will be watching from home—not because Sheppard took her off the horse, but because on Friday, Aug. 4, the National Steeplechase Association put out a terse press release: “By order of the NSA Stewards Advisory Committee, apprentice jockeys are no longer permitted to ride in steeplechase races at Saratoga and Belmont. This policy is effective immediately.”

Continue reading at The Racing Biz