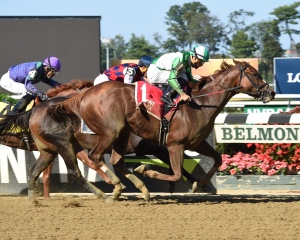 Four years ago, London Bridge became the first New York-bred to win a Breeders’ Cup race when he won the $500,000 G2 Marathon at Santa Anita. Bred by Patricia S. Purdy and owned by Waratah Thoroughbreds, London Bridge raced in England and France, making his first and only start in the United States that day.

Bred by Castellare DiCracchiolo Stable, Cracchiolo & Goldsher, she was purchased for $50,000 as a yearling at the 2010 Saratoga sale of New York-breds; four years later and two days after her Breeders’ Cup win, Stonestreet Thoroughbred Holdings took her home for $1.2 million.

Five New York-breds are possibles for next week’s Breeders’ Cup at Del Mar; though entries won’t be drawn until next week and not all these horses are confirmed to go, should any of them follow in the footsteps of London Bridge and Dayatthespa, it will further raise the profile of New York’s breeding program and the breeder and owner awards system that has transformed the face of the industry in the state.

And, while both London Bridge (Arch) and Dayatthespa (City Zip) were by Kentucky stallions, four of this year’s prospective New York-bred Breeders’ Cup horses were sired by stallions standing in New York.