On Thursday, August 10, as the New York Racing Association’s Talking Horses television show began, two women sat behind the desk, ready to handicap that day’s Saratoga card for the thousands on-track and watching on television and the internet.

That in itself was noteworthy, given the paucity of women on the NYRA broadcast until recently. Add in that both women grew up in prominent Maryland racing families, and you’d have had to figure that the odds of both of them ending up on arguably the country’s most-watched simulcast feed were… well, even with the new regs, you’d have to fill out an IRS ticket on that one.

Yet there they were. 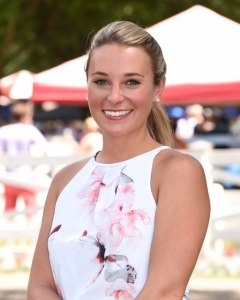 Maggie Wolfendale Morley and Gabby Gaudet don’t often appear together on Talking Horses—that day in August was Fabulous Fillies Day, so their joint engagement was something of a gimmick—but they are staples of NYRA broadcasts, and individually or as a team, they’ve broken a glass ceiling in New York racing.

Continue reading at The Racing Biz